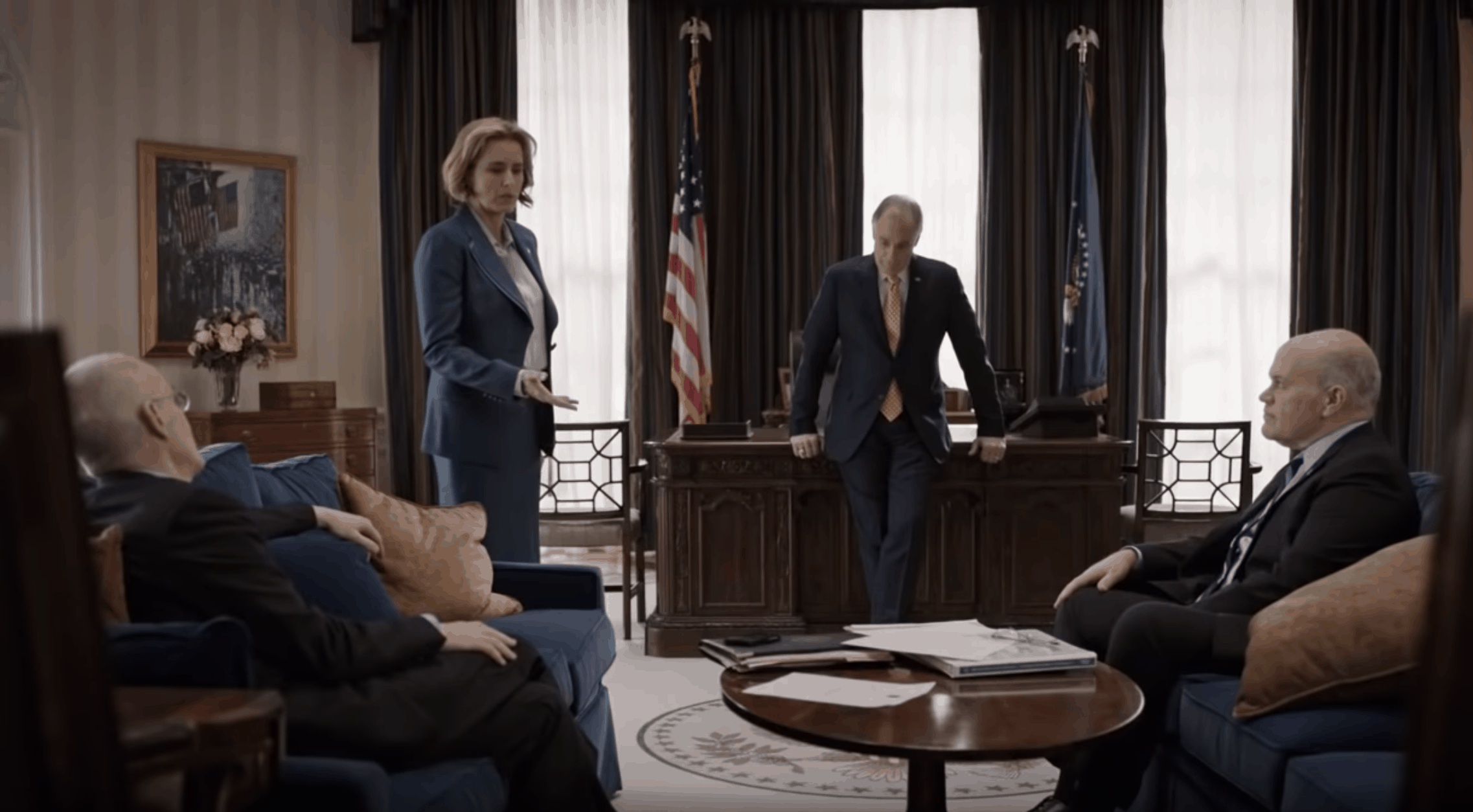 When corporations involve themselves in government issues, it pretty much spells disaster. In this week’s episode of Madam Secretary, Elizabeth must salvage a deal with a military contractor. The reason? To prevent another world war.

One thing I didn’t understand is why they didn’t take Henry’s concerns about the F-40 fighter jets into consideration. I mean, he actually flew in the jet at the beginning of the episode, so why just give him a brief mention like a conversation topic? I, for one, think that Henry’s thoughts on the jets are valid but it’s too late to do something about it since the United States end up purchasing the jets after arresting the CEO of Fossor Industries for shady dealing. Hope that the Air Force will take the necessary precautions.

Another thing I didn’t understand is why sell it to Taiwan at all? They never wanted the jets in the first place. Just because the United States doesn’t want them doesn’t necessarily mean that Taiwan does. You call sell someone something that you don’t want, obviously, but if no one wants it, then maybe you shouldn’t try to force them to buy it. Even David Yu, the representative from the Taipei Economic Cultural Office flat out said that the U.S. should not send the jets to Taiwan.

Speaking of Fossor Industries, why would Capital Hill allow a corporation to have a say in the overall decision-making process? I would understand if it’s for electing government officials since they require funds, but this makes no sense to me. On the other hand, it might have something to do with the fact that Fossor Industries are the ones manufacturing said F-40 jets. Confusion aside, I’m glad that the Fossor CEO got his just desserts. Evil never wins. It really doesn’t.

Meanwhile, someone at the State Department is responsible for leaking the memo about the sale of the jets to Taiwan. The Department of Justice and the FBI investigated and I had a feeling that it was Gary Martin, who works as the Deputy Assistant Secretary at the Bureau of Political-Military Affairs. He is cynical and distrusting at first and saw through Blake’s motives when he invited the undersecretary out for drinks. Wonder if he should be the American version of a certain consulting detective? Just a thought.

The actual culprit, turns out, is Gary’s girlfriend Megan Morrison. Fossor pays off her debts and she helps them intercept the State Department memo in return. I certainly did not see that coming. Truly I didn’t. Though I do see how an offer like this will tempt someone like her. Shame it landed her in FBI custody. Said it once and I’ll say it again: evil never wins.

All in all, the sale of the jets was footed by Fossor Industries, keeping the planes in the United States. The CEO of the company will, of course, face charges and deal with the consequences that follow. Elizabeth was none too happy about the result, but she will have to live with it. That and Henry can help calm her down given that in situations like this, he tends to be the Voice of Reason. She will make an excellent president someday, though she will have to learn to play the political game once she steps onto the campaign trail. The Fair Word and Trade Agreement is also back on the table after Elizabeth smoothed China’s feathers in Quebec. Win-win for everyone!

I find Congressman Brandt’s stunt on the Hill to be both conniving and irksome. I guess that Fossor pressured him into saying that President Dalton should not have cancelled the military contract. Though he did bring up an important point about people losing their jobs should the sale not go through. Then again, contract or no, those who work to build the planes would be out of work. Mostly because China is not happy that America is giving Taiwan fancy fighter jets and they will put a stop to it by any means which would then inevitably lead to WWIII.

The whole Daisy/Matt subplot was a tad off-topic, but it was nice to see Waffles again. Daisy knows that Matt’s building doesn’t allow pets but she still expects Matt to help her take care of Waffles. I get that she’s busy, though, in Matt’s defence, he is stuck between a rock and a hard place. The only place that he can look after Waffles is at work and he is also busy which doesn’t let him have enough time to care for the dog. I do commend him for working out a compromise with his landlord so that Waffles can remain with Daisy and not in another home.

The scene where Blake offers Gary a job at the Kennedy School in Boston, it made me smile. Blake has a big heart and is willing to help out when needed the most. The advice that Gary gives him is also helpful. That Blake needs to have a big heart if he wants to keep fighting the good fight. It might be hard since this job will chip away at it every day but I’m sure that Blake can handle the pressure. I also hope that these two will keep in touch. Gary needs friends in his life and Blake is a great friend.

Funny Moment: Matt referring to the cone around Waffle’s neck as a “Waffle Cone”. Good one, show!