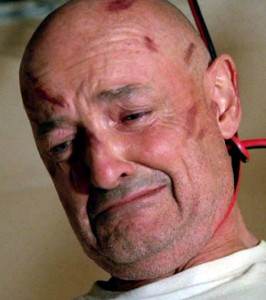 I take Lost entirely too seriously. This is the first installment of what I hope will become my weekly recap of the show, infused with just enough detail and sarcasm to satisfy all.

On the island. Locke turned the Frozen Donkey Wheel. He didn’t seem cold. That’s odd. Christian Shephard told him to say hello to his son. Locke didn’t find that to be an odd request from a ghost. So he asked who his son is. Naturally. The fancy flash thing happened. Adios, island. Sayonara, Locke.

Off the island. Just like Ben before him (or after, who knows with time travel), Locke woke up in the Tunisian desert. He was hurt and disoriented. Like Ben was. Except worse. Ben cut his arm falling into the frozen donkey wheel lair; Locke fractured his shin. Ouch and yikes.

Locke saw a camera in the desert. Naturally. Some men picked him up later that night. They tossed him into a truck. Not so gentle. Locke arrived at an unknown hospital. The jars of pills were unlabeled. Jack would like it there. Locke sees the mysterious Matthew Abaddon at the hospital. A doctor gave Locke a handful of pills, a glass of dirty water and something to bite down on. He then reset Locke’s leg. Ouch and yikes times two. Locke passed out. I would too.

Charles Widmore was at Locke’s bedside when he woke up. He’d flown in a specialist to fix Locke’s leg. He should have Googled more Tunisian physicians. That was brutal. Locke didn’t remember meeting young soldier Widmore on the island, but Widmore recalled Locke. Seems he hasn’t aged. Sounds like someone else we know. Someone who may or may not use guyliner. So the Tunisian desert is the exit from the island. You turn the frozen donkey wheel in a frozen lair beneath an island and you are transported to an arid region in North Africa. Naturally.

Widmore claimed to have been the leader on the island before being exiled by Ben. As if. Locke told him he’d volunteered to leave in order to bring everyone back. Widmore warned of an impending war and that Locke had to return or else the wrong side would win. Locke seemed confused about whether to believe Ben or Widmore. It happens often. All you have to do is call him special and he’ll follow you blindly.

Daddy Widmore has been keeping tabs on the Oceanic Six. So has Ben. Duh. No wonder Locke doesn’t know who to listen to. Widmore gave him files on his friends with their whereabouts, money, a cell phone and a passport for Jeremy Bentham. He acknowledged that Locke was named after a philosopher so why not use another one’s name. Naturally. Oh, and he threw in Abaddon for good measure. And to chauffeur. And for protection.

Locke and Abaddon then traveled to the Dominican Republic, where Sayid was doing volunteer work. Naturally. Sayid would not budge, and quickly disregarded Locke’s request to return to the island.

So off they went to New York, to see Walt. He wasn’t surprised to see Locke because he’d been having dreams about him in a suit on the beach surrounded by people who wanted to hurt him. Cue the sinister foreshadowing score. Walt asked about his dad, but not about his dog. WTF. Ben was there watching it all. Naturally.

Abaddon then took Locke to see Hurley at the Santa Rosa mental institute…which is in Los Angeles, not hundreds of miles north in Santa Rosa. Production error! Hurley thought he was Ghost Locke, because Ghost Charlie had visited him there previously. Hurley was drawing the Sphinx in Egypt. That’s probably relevant. Naturally. He turned Locke down. Evil Abaddon freaked him out.

Abaddon acknowledged his role as Widmore’s errand boy. He gets people where they need to go. Locke remembers meeting him at the rehab facility where he was recovering after being pushed out of the window.

Kate was less than receptive to Locke’s visit. She’s stolen a kid and blew up her dad; no need to be rude about Locke’s lack of love.

Meanwhile, Locke had asked Abaddon to find his ex, Helen. He did. She had died of a brain aneurysm. Or did she…

Someone shot and killed Abaddon. Locke drove away with a cast on his leg. Bad idea. Forget lead foot – one was in plaster, the other in flip flop. He crashed into many and was crashed into by others. He woke up in Jack’s hospital. Naturally. Jack had a beard. It was fuzzy but not quite Joaquin Phoenix. They argued over coincidence versus fate. Yawn. Jack left in a huff, but Locke said hi from his dad. That infuriated him even more. Like Sayid and Kate, Jack insulted Locke. It worked this time.

Locke wrote the suicide note about Jack not believing him. He then set up an electrical cord as a noose and was about to kill himself when Ben magically appeared. Naturally. Ben said he killed Abaddon because he thought Abaddon was going to kill Locke. He promised to help Locke get the Oceanic Six back to island and seemed surprised to hear that Jin was still alive. Ben then helped Locke down from the ledge, waited to hear that he knew about Hawking…and then strangled him with the cord. Didn’t think the little guy had it in him.

Back on the (smaller Hydra) island, where Ajira flight 316 crashed, new guy Caesar riffles through an old Dharma office looking at maps created by a crazy French lady and an ageless physicist who never takes off his tie. He takes a gun. New girl Ilana is suspicious. She tells him there was a man in a suit in the water who wasn’t on the plane. They leave for the beach and pass the Ajira plane, which seems intact.

Locke is alive. He looks like Obi Wan Kenobi. But he’s not that smart. Pilot Frank and a mystery woman took an outrigger canoe. Ilana asks Locke questions. He remembers dying. Naturally. Well, not naturally as it turns out.

Caesar is back in the office. Locke informs him about the Dharma Initiative. Caesar asks why Hurley and the others disappeared from the plane, and Locke gives a vague response. Naturally. Some of the passengers from the flight were injured, including Ben. This makes Locke strangely happy, and he tells Caesar that Ben killed him.

That is the death and life of Jeremy John Bentham Locke.

[Jo is a Lost and pop culture blogger who needs to take a break from theorizing long enough to recap her favorite show once a week with a sense of humor. This is the site to do so. All of her other Lost posts can be found at: http://jopinionated.blogspot.com]