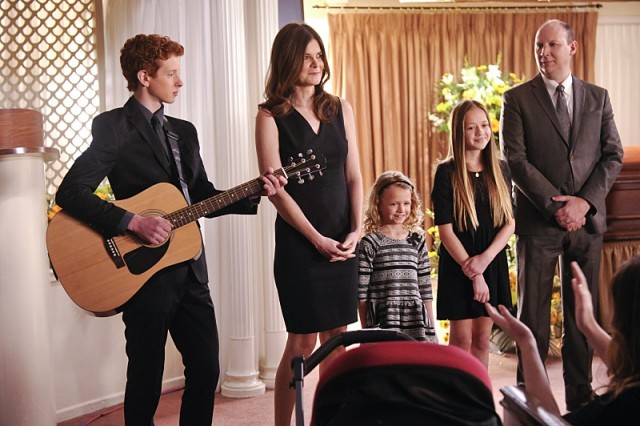 Much of the hype around Life in Pieces centers on how the show “reinvents” the family comedy, which, if we’re being honest, is a pretty impossible thing to do at this point in time. Family comedies, particularly on networks, have fallen into a predictable pattern over the decades, leaning on conservative family structures and ideals (or on the other half of the coin, playing “progressive” to outlandish effect) to tell reaffirming stories about the power of family and the elusive nature of genetics to make us care about the types of people we normally ridicule and hate. Recently, even changes to the basic structure have hailed themselves as revolutionary: as much as I enjoyed the first season of Modern Family, once the glitz of the mockumentary style wore off, it revealed itself to be a pretty typical (and often regressive) family sitcom.

Life in Pieces, created by Better Off Ted and Less Than Perfect writer/producer Justin Adler, is not quite as progressive as it likes to think it is. It’s format — each episode consists of four short stories focusing on different elements of the Short family — may feel inventive, but considering “Pilot” titles its vignettes ‘The First Date,’ ‘The Delivery,’ ‘The College Visit,’ and ‘The Funeral,’ it’s pretty clear that its narrative construction is a new coat of make-up on a familiar story of a family trying to learn to appreciate the little moments, good and bad, that bring them together.

However, it’s not the premises of the vignettes in “Pilot” that are problematic; it’s the saccharine way the episode tries to summarize them that is troubling and disappointing. The stories themselves, while fairly predictable, are given some life with the performers. Zoe Lister-Jones and Colin Hanks in particular are fantastic as two parents going through the 24 hours after childbirth, even when the episode goes for shock laughs with Lister-Jones’ horrified reaction to her own post-birth vagina. While none of the segments are long enough to establish who any of these characters really are, the two of them bring some much-needed life to Greg and Jen’s first days as a parent, the one time when the comedic material of Life in Pieces really shines.

The rest of Life in Pieces‘ first episode is what you’d expect, given the titles: the ex-husband who lives with his ex (something that’s becoming more and more common with each passing TV season — anyone else find this odd?), the overprotective mother overreacting to her kid beginning to look for college, a child that’s way too intelligent for their age, and an eccentric set of parents who still have a child living with them. Each character of Life in Pieces is an archetype, and “Pilot” doesn’t go far enough in establishing any of them as meaningful, unique entities to make the material of its first 22 minutes engaging.

Life in Pieces, while trying to present itself as a new take on the family comedy, offers a first episode that’s anything but fresh — and anything but extremely lily-white, the only minority characters in the whole pilot being the disgruntled ex-fiancee (played by Jordan Peele) and the Asian maternity doctor (Susan Park, criminally underutilized after her wonderful supporting role in Fargo). Its attempts to distinguish itself only make it feel more typical: jokes about how sex dies after marriage, already-dated pop culture references (“Uptown Funk” is still making its way into TV shows — will I ever stop hearing that terrible collection of noises?), and of course, the climatic speech delivered by the biggest star (here, it’s James Brolin) that might as well be said looking directly into the camera. Hopefully, future episodes will fulfill the hype of Life in Pieces being a “different” kind of family show. “Pilot” has ample opportunity to surprise audiences with a fresh approach to familiar stories, and offers anything but.