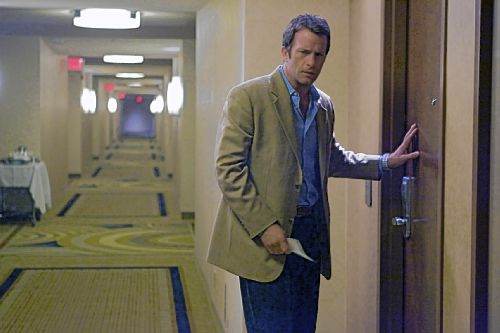 As much as I like Hung, it was missing an essential ingredient tonight, and that was Ray’s kids. Their absence was very conspicuous, and I spent most of the episode wondering where they are. I also missed Eddie Jemison in this week’s episode as well. In fact, this was sort of a bare-bones episode as far as the main cast goes; besides Ray and Tanya, only Jess shows up, and only for a few seconds at that.

But it was by no means a boring episode, and had some interesting character developments on the parts of both Tanya and Ray, though they hardly interacted through the episode.

As the episode opens, Ray is leading Jemma to a spot unknown to her. He finally takes her to his tent, opening up just a little more of himself to her. She doesn’t understand why they can’t go into the house, but Ray convinces her to go into the tent. They do, and spend the rest of the night in heated passion.

Meanwhile, Tanya is drinking away her sorrows at a bar, when from across the bar a man gets her attention, coming over to meet her. His name is Piers, and in her drunkenness, they kiss.

The next morning, Ray wakes up and sees that Jemma has already gone, leaving a fold of money in her wake. Ray takes this as a “kick in the gut,” because he was trying to move beyond doing business with her and into a more personal relationship. He goes to give Tanya her cut of the money, and apologizes to her for circumventing her once again. He tells her that he no longer wants Jemma as a client, and instead as a girlfriend. Tanya reacts angrily, slamming the door in his face.

But before she does, Ray hears Piers’ voice. The two have spent the night together, and Piers is excited to make Tanya breakfast. While she waits on the couch, she looks at his camera, finding photos of Middle Eastern militants holding firearms; Piers explains to her that he does a travel show called Bombed, where he goes and gets literally “bombed” (drunk) with the inhabitants of a war-torn country. Tanya in return laments about her lost prospects as a poet, and blames her mother for her lost fortune.

Piers, taking on Tanya as his new project, takes her to her mother’s house. Though her mother is not home, they go up to Tanya’s old room and start looking at Tanya’s yearbook; Tanya also finds a poem she wrote in seventh grade called “The Indelible Stench.” (Which accounts for half the episode’s title.) Tanya’s mother soon arrives, and immediately begins to belittle and insult Tanya in front of Piers.

Ray, meanwhile, begins looking for new cilents at the local market. His attempts humorously go unrequited, though he eventually runs into Jess, his ex-wife, who invites him to dinner with her, the kids, and her new husband. Ray tries to dodge, but Jess tells him the invitation is open for anytime. She seems to be attracted to Ray once again, after realizing that her new husband’s money is gone. She’s very shallow, and hopefully Ray won’t fall for her conniving anymore.

Meanwhile, at a restaurant (the same one Tanya met Floyd in a few weeks ago), Tanya vents to Piers, about her frustration with her mother. Piers tells her she should write a poem and read it to her mother at one of her mother’s covered-dish academic meetings, but Tanya becomes destracted once she hears Floyd conning a woman named Rita, telling her she needs to let her “Rita flower blossom” (the other half of the episode’s title). Tanya angrily confronts Floyd, finally telling him to “f off” after Piers walks up as well.

Ray finally gets a return call from Jemma, and she agrees to go on a boat ride with him as their first real date. She agrees. Ray then proceeds to call Tanya as he makes his way home, and he thanks her, and tells her how much he appreciates her. She ignores his call as she struggles for the inspiration to write.

Ray, meanwhile, is offered a hot shower by his neighbor’s wife, who has noticed the hot water heater in his front yard, because her husband is out of town. He agrees, but as he steps out of the shower she walks in, and sees him nude. She is absolutely shocked and amazed (“It is a beautiful penis”) and offers him a deal, that she will take care of him as long as he takes care of her. Thinking she means money in exchange for sex, Ray agrees. The two have sex, ending with her screaming Ray’s name loudly enough that it is heard outside.

Tanya, meanwhile, goes to her mother’s dinner party. After the dinner, Tanya reads her work of poetry about her mother. The academics are appreciative, but after a Ugandan woman begins to sing one of her native songs, Tanya angrily realizes that she can’t compete with the artistic ability of the other people around her, and leaves. Piers follows her outside, and she scornfully admits that the poem she just read was written when she was fourteen, and that she views herself as a failure. She leaves Ray sitting on her mother’s doorstep as she leaves to go home.

Meanwhile, Ray gets dressed after sex with his neighbor’s wife, but finds out that she only meant that she would convince her husband to stop giving Ray citations. Ray is slightly disheartened by his failure as a pimp, but reasons that he got a “pretty fair trade.”

Tanya, meanwhile, goes home and soon gets inspiration to write, while Ray hurries to his boat date with Jemma, only to find out that she’s stood him up. He stands and watches the boat sail away as the episode ends. 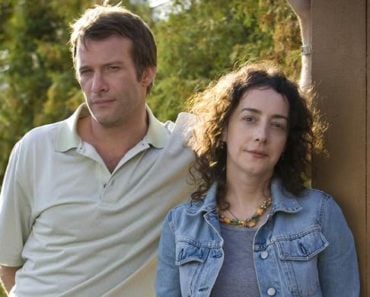 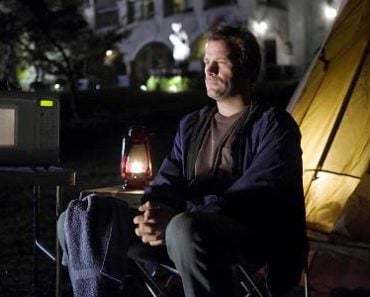