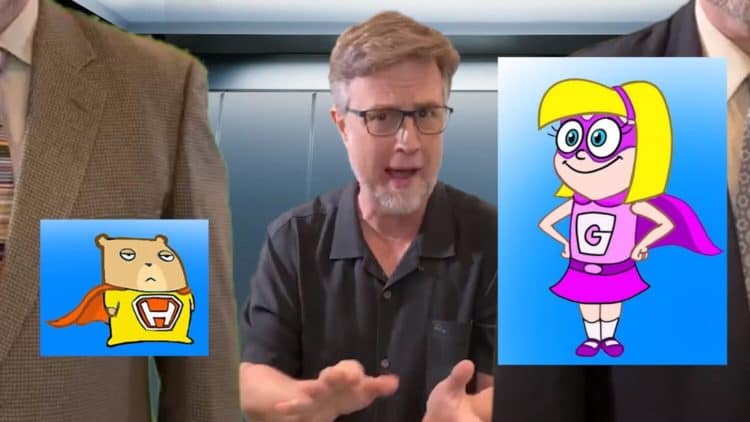 Hopefully, a pitch takes more than this to make a show happen, and it does obviously, but otherwise, it would certainly explain why some shows have been given the green light over the years since they might be decisions made at the moment and regretted in the long-term. But Hamster and Gretel are bound to be a fun show for kids since a lot of can probably remember shows that we were into when we were younger that appear kind of brainless at this point. Sometimes it’s all about the chance to entertain the desired audience and not really worry about anything else. The whole premise is that aliens apparently come down out of the sky and attempt to gift Gretel and her brother Kevin with powers, only something goes awry and Gretel’s hamster, who is in the car with them, is given powers instead of Kevin. Yeah, that might strain things between a brother and sister a bit, especially since one has to wonder just what kind of powers Hamster will have and how out of bounds this show will go once it’s up and running. Considering that the creator of the show is the same guy that came up with Phineas and Ferb it’s very likely that things are about to get a little nutty, again.

A lot of us can’t really talk when it comes to crazy cartoon since we grew up with such things as Looney Tunes, then Tiny Toons, and many other cartoons that were absolutely crazy, and we loved them simply because they were so out of whack that our parents would at times roll their eyes and wonder why we were so amused. There are plenty of cartoons out there like that today, and those of us that are parents probably do the same thing that our parents did, which means roll our eyes, wonder what is so entertaining about it, and just go on with our day. Kids are going to like pretty much anything that allows them to experience a fun and engaging story, and the truth is that some adults love these shows as well since they remind them of the good old days, or are at least entertaining enough that they can get into them and enjoy the programs with their kids. There are plenty of us that might not sit down to watch cartoons but can still understand the allure of them and why kids would continue to enjoy them without questioning why.

Some would call such cartoons brainless, but to be fair they’re a bit nutty but still kind of smart in their own ways since they don’t promote pure chaos, but forward-thinking and the ability to push one’s thoughts outside of the box in a very big way. Just in case you’re reading on and wondering what I’m talking about, it’s all about imagination and where it can take us. A child that doesn’t know how to use their imagination is a tragic thing, to be honest, but such shows are a way to help kids, both those that have a healthy imagination and those that might need a little help, to have fun with and experience the world around them in a way that is bound to make their upbringing a little more enjoyable at times. Such cartoons are easily seen as a way to inspire kids and to entertain them at the same time, providing another important of pop culture that exists at their level and doesn’t demand too much of them, but also doesn’t pander to them in such an obvious manner. Educational cartoons are great and they serve a very important purpose, but the wild and crazy cartoons that stimulate the imagination are just as important since they’re not quite as ordered and structured at times and allow kids to go beyond the limits of their learning to think about the world in different terms that allows them to then push the limits and boundaries that they’ve been given. That’s a healthy balance, the ability to enjoy the order and structured world that a child is given, and then to turn around and embrace the semi-chaotic way that cartoons challenge the kids by allowing them to let go of reality for a little while.

Granted, Hamster and Gretel does appear as though it’s going to be more than a little silly, but the whole point of being a kid is knowing when to be silly and when to tighten it up and learn. If you can’t allow yourself to loosen up and just be ridiculous every now and again though then life becomes a little harder and a little more boring. Cartoons like this are a big reason why childhood is so much fun when we’re younger. It could be a very fun show.