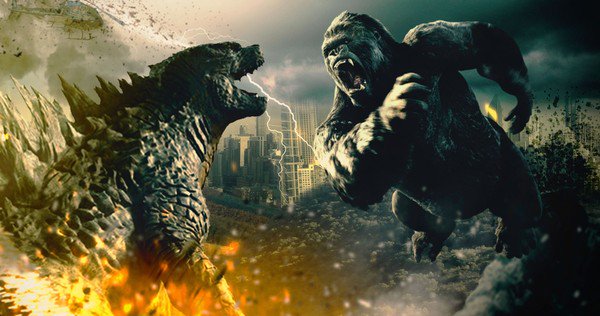 When a king and a warrior clash it’s anyone’s ball game, but when kings of this kind of epic tale come together there’s no telling what’s going to happen. Godzilla vs. King Kong is a fight that a lot of people have been dying to see ever since the two titans finally came back to the big screen in a most impressive way. Negating the failed attempts that were pushed in previous years, basically the film where an asexual Godzilla tried to take over New York with his/her spawn, and the failed epic that was Jack Black’s ill-advised foray into one of the greatest tales ever told, this coming movie should be, in one word, awesome. The two kings are the respective powerhouses of their universe and more than that, they’re more evenly matched than you might believe. Looking at them as they stand now you might be scratching your head and thinking that I’ve gone off the deep end, but let’s go to the tale of the tape and figure this out.

They both possess a wide array of abilities.

Some say that Kong is simply too small to take on Godzilla, and if he wasn’t going to grow any further then that might be the case. But keep in mind that in Kong: Skull Island, it was stated that Kong “isn’t done growing yet”. This means that Kong will no doubt shoot past his hundred-foot height, which is a horrible disadvantage against Godzilla’s three-hundred foot plus frame. Also, it’s been seen that Kong is far more advanced in his thinking since he will take to making improvised weapons that he finds on the battlefield, such as the tree he stripped with one hand and the rusted old propeller he used as a flail against the Skullcrawler. His strength might not be the biggest help against Godzilla but it will keep him in the fight, and there’s no doubt that his agility and greater speed will allow him to move around Godzilla much quicker than the giant lizard can hope to match. Between his strength, his agility, and his ability to improvise Kong is still firmly in this fight and won’t go down easily, if he goes down at all.

The downside for Kong is that Godzilla has a very deadly array of weapons. From his bite to his tail to his atomic breath weapon the colossal lizard is simply a threat to anything that stands in his way. His armored body and spiky back are serious detriments to Kong since they offer no glaring weak spots that the big ape might take advantage of. The tail slap is something that Kong may or may not see coming since if you look in this clip Godzilla is good enough with that appendage to time the passage of the MUTO and then tail slap it into a building, killing it immediately. On top of that, Godzilla isn’t too far behind Kong when it comes to battle savvy, as grabbing the second MUTO and forcing its mouth wide open to deliver a killing blast of blue, flaming breath down its gullet proves that Godzilla can reason just as well as anyone else. That is a serious issue for Kong to consider since unless he evades the first blast he won’t know what it means when Godzilla’s breath weapon starts charging up.

Where they fight will make a big difference.

It it’s an aquatic setting that they fight in Godzilla will have another huge advantage since it seems that he’s a much greater swimmer than Kong. However if they fight in a city or forested region then the odds will tip a bit and Kong will have better time of dodging and evading anything Godzilla can throw at him. Despite their size difference, which is still going to be a factor even if Kong gains another hundred feet or so, the big ape will not back down since he’s bound and determined to take down anything that he perceives as a threat. But if they happen to fight in an area where he can use the terrain to his advantage then it will swing things in his favor just a bit.

You know there’s going to be another threat other than them.

Kong and Godzilla are the two kings of the monsterverse, and as everyone knows it’s been common for the kings to come together in many movies in order to combat a greater threat. Since other monsters have been slated to appear in this coming movie you simply know that at one point Kong and Godzilla will put their differences aside and seek to tear apart those creatures that are bent on little more than destruction. No matter what lies between them they’ve been seen to champion order more than anything, and the other monsters that have come along have been about nothing more than chaos and destruction. So as good as the fight might be, you just know that Kong and Godzilla will join forces eventually.

And it will STILL be epic.