Home
Television
Girls
The Most Fun Moment in the History of Girls: Hannah and Elijah Dancing to Icona Pop’s “I Love It” 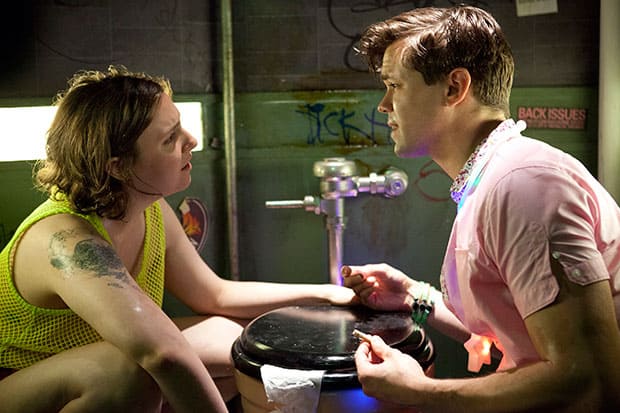 My favorite character on Girls is Elijah who is played by Andrew Rannells, who by the way I argue needs his own show.   And above just about everything else I think the most entertaining moments on the show are the interactions that he and Hannah have.  There’s just something so incredibly genuine about their chemistry.  Lena Dunham and Rennells are brilliant together and every time I watch these two I’m magically whisked back into my 20s and almost want to live in my dingy studio apartment again.

But perhaps no scene in Girls with these two is better than the sequence where the two of them get completely annihilated on booze and drugs and take it to the dance floor with Icona Pop’s “I Love It” blasting in the club.  While this song is amazing in its own right, I personally think it’s one of the best uses of a song in any show or movie, ever.    (P.S. my number one favorite use of a song in a movie is Jimi Hendrix’s “All Along the Watchtower” in the movie Blue Chips when coach confronts Tony on the point shaving incident in his dorm room)  Anyway, there’s no moment on television that I dream of my 20s more than this scene.

Below is only a 50 second clip but if you have a chance, go back and watch this entire episode again.  It’s hilarious.  Plus Laird is in it, who is probably my second favorite character on the show.  P.S. this episode is entitled “Cocaine Blues.”  It’s season 2, episode 3 for reference.