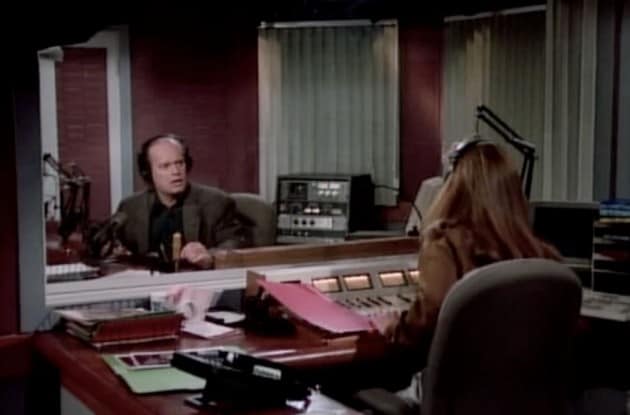 “Fortysomething” is an episode ofÂ FrasierÂ with a very neat, very weird split between it. What begins as a somber reflection on middle age eventually turns into Frasier contemplating the morality of dating a 22 year old. That’s the trajectory of the episode: from existential to superficial, “Fortysomething” is a half hour of drastic tonal shifts and half-baked ideas about the mentality of a man coming to terms with his own mortality as he settles into the everyday routine of his life.

The progression of “Fortysomething” is neither funny, poignant, or terrible; the only way to describe it is confounding. In an abstract sense, the plot of the episode works: Frasier notices he’s forgetting things, considers the onset of middle age, then flirts with a 22 year old. The basic outline of “Fortysomething,” while it gives the secondary cast literally nothing to do beyond reacting to Frasier, is pretty strong, but how “Fortysomething” fills out the details around that story and tries to convey its emotional beats is extremely odd. First off, it turns Frasier into a bumbling idiot to create the tension around his age (which is onlyÂ 41 – 41!): he forgets Roz’s name on air, can’t remember how to play his favorite piano piece, and constantly makes references to other moments where his memory recall failed him. He talks about it so much in the first act it seems the episode is heading down a path to discuss Alzheimer’s, but when a young woman starts flirting with Frasier, he completely forgets about his mental capacities and the episode suddenly becomes a moral play about dating and ageism.

I did not stutter. This episode begins with Frasier beginning to forgetÂ everythingÂ and panicking about it, and it ends with him fretting over whether to date a beautiful woman, because she’s 22 and he’s 41. I suppose the simple answer for this is “it was 1994,” but the problems with the episode go beyond how anxious Frasier gets about their age difference. It’s odd because where the story begins and ends are completely unrelated, with neither offering any sort of connective tissue between them except vague discussions about aging, and what kind of effect it has on a human being – there’s an early scene that broaches this idea with Frasier and Marty talking about Marty’s own mid-life crisis back in 1974, but it’s only moments later that “Fortysomething” cuts away to introduce Keri, the hot, empty 22 year old who wants to date Frasier, but who he eventually declines dating.

It even avoids engaging with the best idea presented in the episode: Frasier approaches Niles for advice about what to do, and he basically tells him to put his middle finger up to the world and do what makes him happy. When FrasierÂ doesn’tÂ do that, “Fortysomething” simply ends, him turning down the Keri on a bunch of BS. It never returns to the deeper psychology of why Frasier won’t allow himself to be happy, and how personal experience and social convention can both play a role in defining that. Without that reflection – or really any reflection of any kind on the very engaging, cerebral ideas vaguely broachedÂ of why Frasier won’tÂ letÂ himself be happy, there’s not much for “Fortysomething” to do but limp off into the closing credits, where we are treated to watching Daphne fold Marty’s intentionally boring laundry.

Sidestepping the most interesting ideas isn’t really the biggest flaw of the episode. It’s no surprise a network sitcom isn’t trying to engage in subtle character observations, the broadness of the format ultimately being its greatest asset in breeding familiarity (and by proxy, loyalty) with an audience. However, “Fortysomething” splits its superficial explorations in half, and the two stories it presents couldn’t contrast anymore; throw in a lazy approach to mental health with Frasier’s aging (seriously: he never gets checked out for all the memory loss? What the hell?), and “Fortysomething” feels more like a mediocre script cutting itself off at the knees, rather than a truly ambitious misfire – or by the same token, a completely pointless episode with no redemptive value.