Home
Movies
Five Great Scenes At the Dentist in Movies 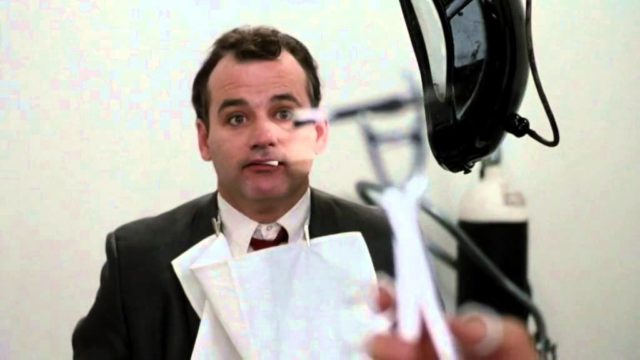 Nobody likes to go to the dentist and in the movies the dentist tends to be a place that many people want to avoid as well. Well really, who would like being laid on their back while someone digs at their teeth with picks and drills and admonishes them on how to properly floss and brush? Honestly they’re a needed profession but sometimes, like physicians, it seems that they’re schooled on how to inflict pain rather than to alleviate it. Of course you have to remember that if you’re going to them with a problem it means that things are already way past normal and the pain is kind of your fault for not taking care of things.

Ah well, the dentist can only do so much.

5. Charlie and the Chocolate Factory

It’s a bit ironic don’t you think? A boy grows up with a dentist for a father and then becomes a chocolate and candy tycoon despite the horror stories given to him by his dear old dad. Willy Wonka didn’t speak to his father for a long, long time, and yet when he finally meets up with him near the end of the movie it’s discovered that for all his love of chocolate and everything sweet, he didn’t forget his father’s lessons.

This would definitely be a different view when it comes to watching a dentist work. Imagine looking over and seeing as a group of fish were watching you get a root canal and possibly commenting on the dentist’s technique. Do you think some people might be freaked out? At least in Pixar movies animals don’t tend to be able to speak to humans in ways that can be understood.

Dentists still use nitrous oxide, commonly referred to as laughing gas, but they tend to use it sparingly so as not to give their patients the giggles. Obviously if you have a needle, a pick, or anything with a sharp tip in your mouth you don’t want to jostle the dentist and make them do something that you’re going to feel either right away or when the gas wears off. As far as getting high off of it I think that valve would have to wide open.

This is why you don’t take an accident-prone person into a dentist’s office where there are a lot of sharp things that can do some damage. Granted, this isn’t bound to happen more than one in a few thousand times in this manner, but in this movie Jessica Alba is just one of the clumsiest people on the planet and so it’s not too much of a stretch to think that she could send a few tools sailing into Chuck’s back by accident.

There are people that like going to the dentist, but very few that like it for this reason. Even a masochist might balk at this kind of rough treatment, but who knows. In any case, Bill Murray’s act is way over the top and absolutely hilarious.

In the movies or real life a lot of people don’t look forward to going to the dentist.