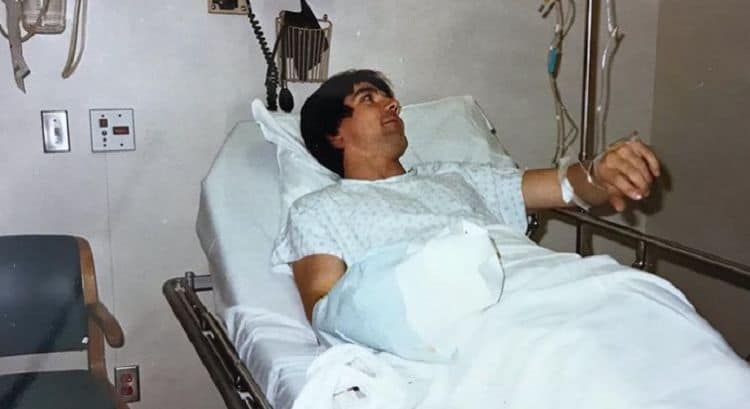 There are lots of people who love a good adrenaline rush, but Eddie Braun has taken things to a completely different level. In fact, he loves the rush of adrenaline so much that he’s made an entire career out of it. For nearly 40 years, Eddie has been working as a stunt double in the entertainment industry, and along the way, he has gotten to work with some of the biggest names in Hollywood. Some of his credits include Transformers, Seven Pounds, and The Avengers. Recently, he has gotten a lot of attention for re-enacting Evel Knievel’s famous Snake River jump in the Disney+ documentary Stuntman. Keep reading to learn 10 things you didn’t know about Eddie Braun.

1. He Developed An Interest In Stunts At An Early Age

Working a stunt performer isn’t a career path that crosses a lot of people’s minds. However, it’s something that Eddie had been thinking about since he was a kid. During an interview with ABC 7 in Chicago, Eddie said, “My first injury as a child was a jump, trying to take my Schwinn Sting Ray bicycle and jump trashcans. I broke my arm. At that point I thought I was so cool, I was like Evel Knievel.”

Most of the work Eddie has done in the entertainment industry has involved stunts, but he also has a good amount of acting credits to his name. He has appeared in both big screen and small screen productions. Some of his credits include iCarly, Walker, Texas Ranger, and Anger Management.

Since Eddie is a stuntman, most people would probably assume that he isn’t afraid of anything. However, that couldn’t be any further from the truth. While talking to GQ, Eddie revealed, “I’m scared of heights. I hate heights with a passion, yet I have to deal with them constantly.”

Eddie has been very fortunate to have a long-lasting and consistent career as a stunt performer. Since landing his first professional stunt job in 1980, he has built a resume that now includes 260 stunt credits. What’s most impressive, however, is the fact that Eddie isn’t finished yet.

5. An Injury Almost Left Him Paralyzed

It goes without saying that doing stunts comes with a very high level of risk. Even though Eddie is very good at what he does, he hasn’t been able to avoid injury over the years. Some of those injuries have even been quite serious. While working on Walker, Texas Ranger in 1999, Eddie broke his back while performing a car jump. Miraculously, he wasn’t paralyzed.

Typically, when people have spent as much time in the entertainment industry as Eddie has, putting their personal life on display becomes part of the job. That has never been Eddie’s style, though. He’s always preferred to keep all of the focus on his work and he likes to keep his private life out of the spotlight.

7. He Doesn’t Think Of Himself As A Daredevil

Daredevil is probably the first word that comes to most people’s minds when they think of Eddie. However, it’s not a word that he would use to describe himself. Eddie told New Atlas, “I would not consider myself a daredevil. There’s a big, distinct difference between a daredevil and a professional stuntman. A daredevil is a guy that just goes out and does something, he’s not sure of the outcome, it’s more like “hold my beer and we’ll see what happens!” A professional stuntman usually does a lot of preparation and homework, and he’s pretty confident of a desired outcome. One he can repeat over and over again.”

Despite the fact that Eddie is very quiet when it comes to his personal life, we do know that he is a very devoted father. He has four children and he hopes that the success he’s had in his career will empower them to understand the importance of going after your dreams.

9. Het Met Evel Knievel When He Was A Kid

Getting the chance to re-create Evel Knievel’s famous jump was special for Eddie in more ways than one. Not only was he attempted to do something that had never been done before, but it was also a great way to honor someone who had inspired him so much. When Eddie was younger, he even got the chance to meet Knievel who personally encouraged him.

10. He’s At A Transition Period In His Career

Now that Eddie is in his 50s, lots of people have assumed that retirement must be approaching. Eddie doesn’t have any plans of doing that, though. From here on out, he will be focusing on smaller stunts that are less likely to leave him seriously injured. He is also working on launching a movie production company.