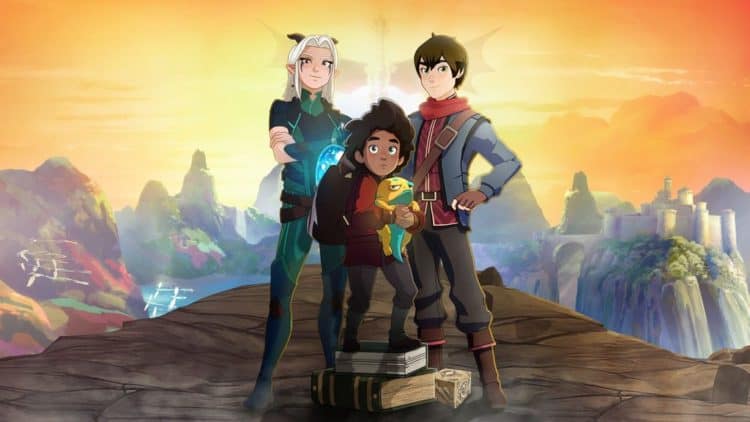 Dragon Prince is one of those animations that you think is good till you watch it and find out it’s even better. The Netflix animated series has become a hit with viewers on the streaming platform. Each season of the three seasons has nine episodes and first aired in August of 2018. It follows exiled princes, Callum, Ezran, and Elf Ryla, as they quest to help a dragon prince in the middle of the ancient war between humans and Elves in the land of Xadia. The war came about by humans who kill powerful beings from Xadia to get dark magic. Despite the mixed reviews of the first season, The Dragon Prince is worth watching for the epic fantasy world that it immerses you in. Even if you have already watched the Netflix original, you will want to know these ten interesting facts about Netflix’s The Dragon Prince.

It Comes from The Creators of Avatar

Ever since The Dragon Prince started promotions back in 2018, they made sure viewers knew the series was from the creators of Avatar: The Last Airbender. So who from Team Ang joined the Netflix original animated series? Aaron Ehasz, the head writer and executive producer of Avatar: The Last Airbender, worked on Futurama. He teamed up with Justin Richmond to create The Dragon Prince universe for the streaming platform. The animated series production is by Wonderstorm Studios, created in 2017 by Aaron Ehasz, Justin Richmond, and Justin Santistevan to have creative control. Jack De Sena, who you might remember as the voice of Sakka in Avatar, joins The Dragon Prince cast as one of the brothers called Callum.

The award-winning animated series has received praise as being one of the most diverse television shows right now. King Harrow in the series is a black king with dreadlocks who has mixed children, Ezran. Aunt Amaya, deaf, has a sign language interpreter named Gren, who escorts her everywhere. Other communities like the LGBTQ+ have been represented, like the case of Queen Aanya having gay parents.

Expected To Have 7 Seasons

Anyone could tell from the promotions to execution of The Dragon Prince; it is clear that the creators of the fantasy drama have massive plans for it. During a virtual ComiCon in 2020, creator Aaron Ehasz revealed to fans that Netflix had greenlit the entire seven-season saga! He has said they will be based on the six types of magic: sun, stars, sky, ocean, moon, earth, plus dark. The first chapter of The Dragon Prince is complete with three seasons; Moon, Sky, and Sun. The second and third chapters of the saga will have two seasons, with Season 4 already named Earth. Netflix has yet to confirm a release date for the latest season, but it should be released sometime in 2021 because of the delays caused by the pandemic.

Unlike other animated shows, The Dragon Prince is rich with fantasy stories that you could get lost in. The end credits feature beautiful art sketches of the characters that are said to hint at future events. It is a fun way for fans of the show to come up with crazy theories and talk about their favorite elf. Like in the post-credits of season 3, episode 4, fans could see a drawing of Callum holding Sakka’s trusted boomerang from Avatar: The Last Airbender, which was a joy to see. It shows the series listens to what the viewers want and enjoys our input.

Most viewers of The Dragon Prince noticed the low frame rate and poor quality when watching the first episodes. It made the series look like it was lagging every time any of the characters spoke. The show creators took an artistic risk to make the series more unique, but they quickly changed their tune after fans’ backlash. In seasons 2 and 3, they even added better visuals and fight scenes that got a lot of praise.

Behind The Scenes Controversy

The Wonderstorm studios producing The Dragon Prince were hit with a sexist scandal in 2019 when season 3 came out. The creator Aaron Ehasz was accused of enabling a sexist environment by two former employees. According to a report on CBR, one woman who worked as Head of Community Development said that Aaron and other men at the office treated women as a joke and ignored their creative input in LGBTQ+ characters despite her being queer. Another woman who worked at Riot Games with the Avatar creator said he would come with his kids to work and leave them with female staff without their permission. Some people even suspect that the sexist allegations are causing Netflix to delay the show’s season 4 release.

The Dragon Prince: Tales of Xadia is a board game based on the animated series. It might be available in September of this year.  Developed by Brotherwise Games, it played with eight miniature characters. There are six Xadian maps and 128 ability cards. A player can build groups of three and have fun as their beloved character. There is also a video game in the works at Wonderstorm. However, there is not much information out on it yet.

The spin-off games are not the only thing Wonderstorm has been working on for their fans. In 2020 they released a few books based on The Dragon Prince. Some of them are Book One: Moon and Book Two: Sky and a graphic novel, The Dragon Prince; Through The Moon, written by Peter Wartman and illustrated by Xanthe Bouma. The graphic novel is set between seasons three and four, so it connects to the whole storyline of the series. Did you know any of the facts above about Netflix’s The Dragon Prince? Still, it is an excellent show with great plots and characters you will root for every time they are on screen.