The second episode of the fifth season of Dexter opens with our favorite serial killer swimming in a pool, while his voiceover says ‘it’s said there are seven stages of grief. I suppose killing someone with my bare hands in a men’s room was my way of working through the anger stage. Whatever the other six stages are, I don’t have time for them, cause now I’m a full-time dad. Once the kids and I are back together, it’ll all be fine.’ 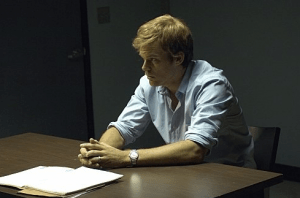 Will being with the kids make everything fine? What happens if he isn’t with the kids, will everything still be fine in the world of Dexter Morgan? We’re about to begin to find out. For our review of this episode, click here.

Dexter brings Astor and Cody to the apartment, but they aren’t thrilled about the idea. “This isn’t our home,” says Astor. He tells them to get to bed because they have school in the morning, but Astor says that she doesn’t have her things for school. He offers to go over to their old house to get them, but she wants to go with him. He tells her it’s not a good idea because of what happened there, and she replies plainly “I know what happened to my mom. She was murdered.” Deb reminds him of his FBI interview in the morning, or as he thinks of it, it’s just ‘one final loose end to tie up.’

During the interview the next day, Dexter tells the FBI agents that he was on his boat at the time of Rita’s death. They say that it seemed odd that he was night boating alone, and points out that Rita was killed “several hours” before he got on his boat. He angrily slams his fists on the table in response. The agents mention that he was at Arthur Mitchell’s house, which makes him visually nervous. Then they remind him that he was there because of the raid, and tell him they know he didn’t kill his wife but are looking to find out why Arthur may have targeted her. “Because he’s a serial killer?” Dexter half states and half asks. As Dexter leaves the station, everyone wishes him well. Just then, one of the FBI agents tell LaGuerta that Arthur Mitchell has disappeared and Kyle Butler is their only lead, but he disappeared too. Batista goes to give his wife her mail as she walks back to her office, but he drops a piece of it and happens to look down to see some mysterious money in her bank account.

After leaving the station, Dexter and Harrison are looking to rent a moving van. He decides to rent a van that’s larger than what he needs because he spots blood in the back of it and gets excited at the thought of what may have happened or who it may belong to.

Back at home, Dexter is starting to organize things for the move. His neighbor Elliot stops in to say hi and bring over the mail. Elliot says he’s sorry about everything, asks if Trinity has been caught, and he offers to be there if Dexter needs any help with the kids now that he’s a single father. Dexter spills his box of knives onto the floor, picks one up and glares at it as if he’s either thinking about using it or reminiscing on past kills.

He takes the boxes over to Deb’s apartment and the kids help unpack. Cody says that he likes it there because “it’s like camping.” Everyone goes to bed, but Dexter is still up, staring out the window. ‘It doesn’t matter how much I love my children, I’m still a creature of the night.’ Harrison wakes up, so he takes him along for the trip to the rented moving truck to check on the blood he saw. He sprays the blood and finds even more than before and thinks he’s figured out just how it got there. Harry appears and asks him if the kids really are his number one priority. “I have to take care of my own needs too, otherwise I risk spinning out of control,” he says to his father. Harry reminds him that the kids are not just his responsibility, but also his salvation. After his late-night excursion to the truck, he goes home to prepare a bottle for Harrison and then look up the history of that truck. He finds that the last person to rent the truck was Boyd Fowler, who put his address down as the Department of Sanitation. Further investigation shows that Fowler’s job is to pick up dead animals, leading Dexter to believe the blood was not from a human, but that didn’t explain the small handprints. He runs a quick test to find that the blood was indeed human.