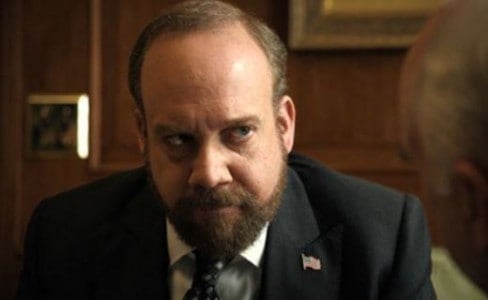 Here’s one reading of tonight’s Billions, and the one that I greatly prefer: Bobby Axlerod fancies himself a genius. He purchased a massive stake in company worth millions upon millions of dollars, just so that he could remove the woman from the board who was sleeping with Chuck Rhoades’ father. He and Wags were very satisfied with themselves. They’ve taken over a company and ousted the CEO; they’ve spend hundreds of millions of dollars to send a message, and they think that it’s brilliant maneuvering.

Hell, it even works! Chuck can’t get it up, even when his wife prods him with, well, a prod. He can’t even focus during the activity that exists strictly so that he can focus. Bobby Axlerod has taken up residence inside Chuck Rhoades’ skull, and is driving him to be a worse man than he fancies himself to be in order to catch him.

But what’s so funny about this scheme to send Chuck a message is how totally stupid it is! I don’t know if the show meant for us to read it this way, but it comes off as totally ludicrous. It’s not that I find the idea of Bobby Axlerod throwing his money around to be unbelievable; on the contrary, it’s very much believable. No, what I find so funny is that these two higher-ups, both swimming in money (Bobby may be near or is a billionaire, but I’d be willing to bet that Chuck is millionaire), are trading these weak jabs. Buying a company to get at someone’s father so that you can send the son a message isn’t bold, or brave, or awesome; it’s just two spoiled rich boys having a spat.

You know what it accomplished, in the end? Nothing. Not a damn thing. All it did was push Chuck further down the path to the dark side, turning him more and more into a man who would do anything to bring his foes down. While Bobby Axlerod schemes in his office, stepping on the financial throats of soft-bellied board members, his wife is doing the hard stuff. She’s the one making moves, and taking things away from people; she’s actually stepping on throats to protect her family. If Bobby was in charge of protection, they’d’ve already been caught, fried, and dried.

All of the men on the show are this way, frankly. I mean, Christ, that speech from Wags about making sure that Maria Saldana, who dared use a rival company for leverage to get herself a bigger piece of the pie, would suffer for the next two years is an exercise in cowardice. He’s not actually going to try and change the situation, or make sure that the world knows how he feels directly; no, he’s just going to piss on her from afar, and hope that by the end of her contract, she’s worth less than a used car. But Wendy Rhoades, after some reluctance, gets proactive; she uses her skills to directly convince Saldana to take the rival company offer, without telling her why she wants her to do it. Wendy saves a friend, and the company. Wendy also talks Bobby off ledges, and away from sword fights; we don’t have the history to know this for sure, but I would bet that Wendy’s influence kept the company away from more than one spike in the road.

First sentence of tonight’s article, I said that what was to follow was one possible reading of tonight’s Billions. But that’s not really true. I wish that Axlerod had used his wealth to take silver spoon potshots at Chuck Rhoades’ father, but the truth isn’t as interesting; he made a play because he genuinely wanted to make the product taste better.

If that is the case, then that plot point cascades and wipes out all of the interesting bits of the episode in totality. Essentially, the show used a coincidence to push forward the narrative, something I despise; it’s one thing to do it in a pilot, at the beginning, when things are still proto and unformed, but to make it a central part of the narrative afterwards rings false to me. If Bobby Axlerod got into Chuck Rhoades’ head on accident, then it makes the resulting doubt that Chuck telling Wendy about Bobby’s hit on his father (and her resulting doubt) mean nothing. If Wendy leaves Bobby, or starts to spy, or whatever because this piece of information drives her forward, then we lose a lot of meaningful character development.

Wendy, in my opinion, is the most important character in the show. She’s the tipping point for either side. I wrote last week that she had already chosen Bobby, and that’s still true; she’s still there, after all, helping the company. But they’ve given her enough doubt (and a way for Bobby to turn on her, with her investing with Saldana) to make me think that her loyalty will sorely tested.

There’s a lot of stuff that I liked in this episode, especially as it went along. It needs to both work on and cut down on the banter; not ever scene needs a quip. You can just talk. There were fewer monologues, which was fantastic. The funny moments, like Chuck making the guy pick up the dog poop or the thing about “a** lube” or Judy screaming that she hates that c**t (meaning Lara Axlerod), aren’t actually funny. That needs work.

Bobby goes after Chuck’s father, Lara goes after someone too chatty, and Chuck finds a way to hit Axlerod where it hurts in the third episode of Billions.