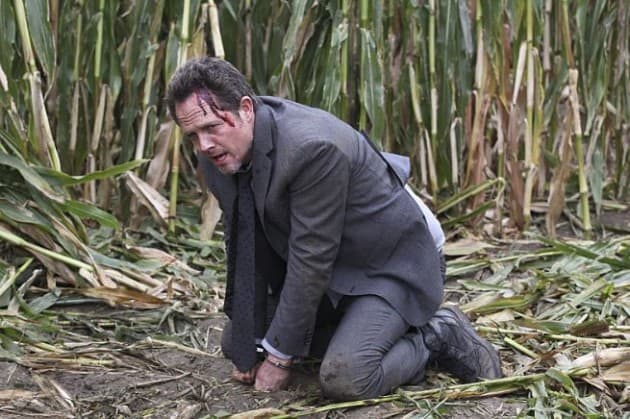 Well, Battle Creek fans, we’ve reached a sad day indeed. Our beloved show has become no more. Lucky for us, Battle Creek provided answers, a strong episode, and an ultimately satisfying conclusion. I apologize in advance, because often reviews of an already-canceled show can feel like an obituary. I’m sorry if I get emotional…I just (*sobs for a few minutes, regains composure*)…I’m sorry.

Overall, Battle Creek gave me everything I wanted in a concluding series. Would I like to have seen more? Of course, but all in all, I’m pleased with the amount of closure provided in the last few episodes. It’s hard when a bubble show like this doesn’t know whether or not it will end, but Battle Creek handled its finale in a graceful yet true (to the characters) sort of way. When the will-they-won’t-they of Russ and Holly was resolved last week, all I could’ve wanted was some insight into why Milt came to Battle Creek. And we got the crap out of it!

Small episodic things (that matter less due to cancellation): I particularly liked the use of the flashbacks out of the trunk to tell the bulk of the story. This show doesn’t have to use Russ and Milt directly to be compelling. The whole story about the drug dealer, the informant, and the parents was compelling and would’ve been so with or without Milt. At the core, you know the people working on Battle Creek are master storytellers, and they proved that in this episode.

As I’ve said all along, Russ and Milt are the best part of this show. While there’s obviously a wonderful supporting cast in place (Kal Penn was amazing in this episode), it’s the chemistry between and stories surrounding Milt and Russ that made the show. The finale was no different. All throughout the episode, we see Milt struggling with the morality of his past actions. He didn’t have to see who it was to know who was coming for him. Josh Duhamel has been masterful as Milt this season, and this worked really well as a culmination of the work he has put in. I could feel the internal conflict alongside Milt. When he ended things on the ground but laughing with Russ, I felt a wonderful sense of closure. Milt has been a cheery, by-the-book federal agent because he’s trying to atone for the wrongs he’s done, and his arc (since it’s now wrapped) was wonderful.

I think Battle Creek wrapped its all-too-short run very well. All the major stories were not tied up in a bow, but there was some closure in place. There were no major cliffhangers, which is great for a canceled show. I felt like the thirteen episodes told several big stories, and all of the major ones were completed, which makes this an excellent sell to Netflix, Hulu, or Amazon (should Battle Creek land somewhere like this, WATCH IT!). Sunday nights at 10 p.m. are tough, and I certainly understand why CBS would want to move on. However, that doesn’t make the storytelling any less wonderful, the characters any less compelling, or the show any less great. Battle Creek, we hardly knew ye, but you will be missed. Thanks for the great ride.