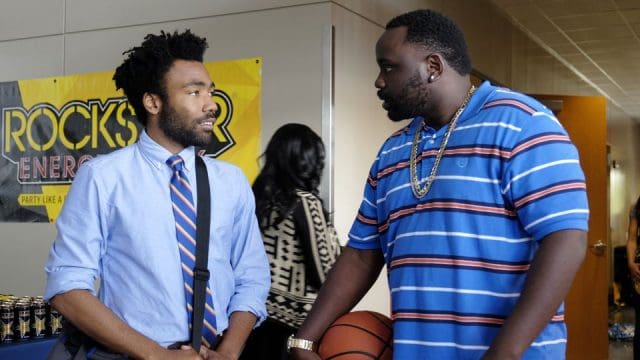 We have three plots in this week’s Atlanta, essentially; Darius Goes To The Gun Range, Earn Crashes An Agent Party, and PaperBoi Hates Justin Bieber. The first plot with Darius is perhaps four or five scenes, and is more a vignette than a fully coherent story. The third plot has no intertextual theme, but a meta-textual one; Justin Bieber, if he were black, would not be given as many chances as he has been in the past. But it’s the second plot, with Earn and his case of mistaken identity, that really befuddles me.

I cannot, for the life of me, figure out what the show is trying to say. It’s one long comic skit, punctuated by a hilarious Jane Adams monologue and a never-better Donald Glover in his reactions, but we learn nothing about anybody. We know no more about Earn than we did before. Perhaps it was a commentary on how few black people there are in the agency game, and how just seeing a black person at one of these events might be a cause for a mistaken identity. But if that’s the case, Atlanta does nothing to reinforce that idea.  It’s just a one-off skit, and it isn’t that funny outside of her end monologue.

The second plot, with PaperBoi feuding with Justin Bieber, is also too-lightly played. If the goal is to point out how much of an asshole Justin Bieber is, and how white celebrities get miles and miles of leeway compared to their black celebrity counterpart, it didn’t quite achieve that for me. I’m not going to make suggestions on how to specifically improve it (of all the things I am unqualified to do, this ranks near the top of the list), but in a general sense, that meta-textual thematic through-line needed much more reinforcement.

The Darius thing is much more clear in it’s execution, and suffers for not being nearly long enough. The joke is clear: how weird is it that we shoot at human targets with no qualms, but get mad when someone shoots a a dog target? Because it’s so short, Atlanta has to go out of it’s way to be very explicit, and the plot suffers for it.

It sounds like, in reading this, that I’m being contradictory; make things more explicit, but also more subtle, too. Maybe I am, but I point back to the plot in the second episode, where Earn is in the prison. Atlanta was able to convey the stupidity and real darkness at the heart of our criminal justice system, with the discussion of the mentally ill man being arrested every week, combined with the laughter of the prison lobby at his actions, and finally punctuated with the mentally ill man’s beating by the police officer. Earn explicitly states the unfairness of the man’s constant arrests, and  the laughter in the room works as the perfect sign card; it rises when people take the man’s condition at face value, and then drops away to total silence when he receives the beating. We get everything we need to know, with very little exposition or dialogue.

I also feel that I’m not giving the show its proper due. This is still entertaining, but it doesn’t blow me away like it had earlier in the season. But if the floor for this show (and I do think this episode has become it’s floor), then Atlanta is in better shape than most any show on TV.