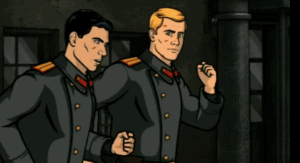 Here’s a fun experiment: Watch a show that you really enjoy with people you’re not sure if they’ll enjoy it. I watched Archer this week with my parents. We have similar senses of humor, but they’re (my mother, in particular) aren’t as fond of vulgarity. “White Nights” did not disappoint in terms of vulgarity. The episode featured Cheryl coping with glue withdrawals, references to sodomy and Malory’s naked backside. I’d say that’s fairly classic Archer. My folks ended up really enjoying it. As my mom said at the end, “It’s entertaining. It’s not stupid.”

No, it’s not, and that’s why Archer can push the crassness envelope and not be offensive or boring.

In “White Nights,” Archer treks to Russia to find Nikolai Jackov, who may or may not be his father. As Archer is captured, Malory enlists the help of ODIN’s Barry Dillon to rescue him.

Last week, I touched on how much I’ve come to enjoy the pairing of Archer and Ray but now I think I have a new favorite “anti-team:” Archer and Barry. I’d say that there should definitely be more of Archer and Barry collaborating, but I’m afraid Barry won’t be doing much of anything anymore because of the whole only-having-one-leg thing. Spoiler alert. Oh, crap. I got that backwards, didn’t I? Their best moment had to have been the Butch Cassidy and the Sundance Kid reference. “Ooooohhhh shiiiiiiiiiii–!”

Self-aware humor has a special place in my heart. As Malory is confronted by the core group of ISIS drones regarding her 40-year affair with Jackov (thanks to Pam and her big mouth), she asks Cheryl who all knows about this indiscretion. Cheryl responds with, “Krieger, Cyril … you know. The core group.” It’s as if the writers are poking fun at themselves by acknowledging the fact that the ISIS office doesn’t seem as alive or as busy as it once did. What ever happened to Scatterbrain Jane?

There’s one episode left for season two and, like I’m sure I’ve said before, it will cap off a stellar season. Who’s excited? I am and I think my parents might be, too.