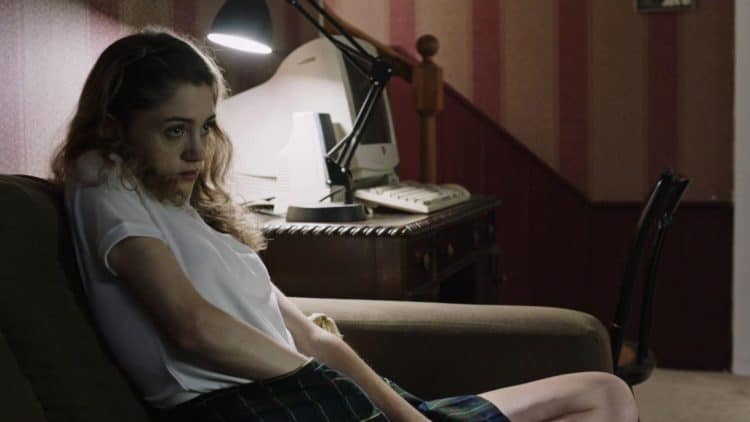 Every year, an independent feature tends to slip by most audiences, which brings us to 2019’s underrated gem, Yes, God, Yes. This feature stars Natalia Dyer as Alice, a Catholic girl who’s still trying to figure out her place in the world. After an AOL chat that turns steamy, the religious girl has intimate and sexual thoughts that jeopardize her place within her Catholic community. I must give a warning first, I’m not Catholic nor do I know much about the religion itself. This article will only explore the themes discussed within the movie and it’s not a personal attack on Catholics and the entire religion. Yes, God, Yes is a small film. It doesn’t have amazing cinematography or grand and exotic locations, and even though this low-budget feature isn’t the visual eye candy that most movies have become today, its messages speak louder than most extravagant blockbusters do. Yes, God, Yes, isn’t just about religion and the hypocrisy of the people who follow it, it’s a coming-of-age story that focuses on a critical part of every teenager’s life as they’re still trying to discover the world around them.

Growing up as a devote Christian myself, I understand how religion can consume and uphold your life. As a young kid, you’re told certain things are wrong and that you’re going to hell if you don’t follow God’s view of the world. I won’t go into a deep dive about religion, but I wanted to explain just how trapped you can become growing up in a religious world, especially for impressionable young minds. Susan Blackwell’s Gina says it best, “nobody knows what they’re doing any more than the rest of us. We’re all just trying to figure out our shit.” Yes, God, Yes does an excellent job of exploring this topic not just through Alice, but Father Murphy, Wade, and Nina as well. Alice’s whole dilemma starts because of a rumor about tossing Wade’s salad. The suspect in question denies that he started the gossip in the first place; however, it’s clear what Wade’s true intentions were: to keep up the facade that he was straight. Religion isn’t exactly kind to homosexuality, and you instantly feel bad for Wade after it’s revealed that he was also watching porn through Father Murphy’s computer. The film highlights how the outdated messages and themes within religion affect modern society.

Sure, Yes, God, Yes doesn’t really take a deep dive into the subject. The film is more of a coming-of-age story than a harsh exposure of the Catholic religion; however, it does pinpoint the issues that modern society struggles to abide by an outdated set of standards. Even Father Murphy is unable to resist temptation of his religious rules. Arguably the biggest fault with Yes, God, Yes is that it’s light and breezy despite its meaty subject. The film is thought-provoking in context; however, some of the issues addressed in the film aren’t given the exposure that it deserves. Still, the movie is a great watch and Natalia Dyer’s performance is tremendous throughout. Being a guy, obviously I’ll never understand the issues that women deal with on a daily basis. However, gender is not the point of the film. Everyone understands being a young adult and not fully figuring out the world around them. Alice is a meek and shy girl who doesn’t even seem to be the type of woman to even try tossing someone’s salad until 40. However, she’s still trying to understand life as each day goes by and the early portion of the film where the young girl gives into temptation of her sexual desires is a relatable manner. Her slow discovery that it’s not a sin to act out on these temptations by witnessing the heavily religious Nina servicing a guy outside of the kitchen window, Father Murphy’s dirty little secret, to her genuine and heartfelt conversation with Gina is expertly showcased through Dyer’s body language and mannerisms. Yes, God, Yes is great at the “show, don’t tell” aspect; Karen Maine clearly trusts that her audience is smart enough to comprehend the story that’s being told, and in turn the film flows naturally because it isn’t dragged down because of clunky exposition. All-in-all, this little indie gem is a must-see for movie lovers everywhere. It doesn’t exactly get to the root of its religious topic and it’s far from the flashiest or the most visually appealing movie you’ll ever see; however, this character driven piece is definitely a coming-of-age story that’s worth your time.