Home
Television
Will and Grace
Will & Grace Review: Who’s Obsessed With Who, Now? 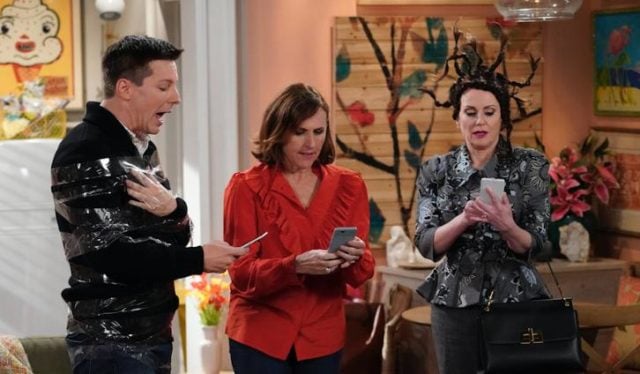 Will & Grace‘s revival has reinvigorated plenty of laughter, but in order to do that, the show had to scrap almost every plot point from its final season. The most important element that had to be scrapped was Grace and Will’s now imaginary children. In our new Will & Grace world, they never had kids. Instead they went back to being best friends living together who had to sit through 40 minutes staring at pictures of other people’s children. When these people aren’t driving them crazy, Will and Grace drive each other crazy – all day and all night. The idea of working together sounded like a good one at the time, but there are a few bumps.

Will is a good businessman, who in an ideal world would bring balance to Grace’s flighty business antics, such as bringing in unqualified staff on a whim. Their dear friend Larry needed something to do after his daughter went off to college. I’m not sure what Grace was expecting, but Larry announcing that he’s working at Adler designs because he’s in love with Will was not one of them. Grace immediately fires Larry to protect everyone, but it would have been nice if she communicated to her partner the reason why. After some unintended awkwardness and nakedness, Larry realizes he’s better off with his husband than anywhere near the middle of Will and Grace.

Elsewhere, Jack begins his new job as a Lyft driver. So many, many, many, many things were fated to go wrong with this idea. It seems fate thought that too and decided to just nudge a little. This is how in the first few seconds of Jack’s Lyft career, he runs straight into Val Bassett (guest star Molly Shannon), otherwise known as crazy Val who has a history of “wackadoo” moves that make Grace so nervous, she keeps keys to the woman’s apartment in case Will ever goes missing. After seeing the shrine that Val made to Karen (with Jack’s face sharply cut out), it’s clear that as long as Jack keeps driving, Val will be jumping in front of Karen’s car.

Bottom line, I thought Shannon was going to steal the show, and for the first half she did. In the end, it was actually Tim Bagley (Larry) who won all the side-stitching laughs.

Will & Grace Season 9 Episode 9 Review: "There's Something About Larry"

Will & Grace aren’t all that comfortable dealing with someone with an unhealthy obsession for one of them, but at least we get some top-notch PG-13 jokes out of it.