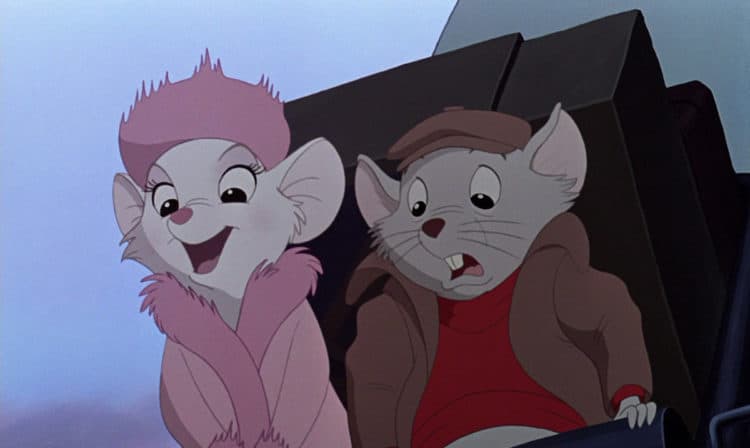 All things considered, not everyone likes Disney’s Dark Age animated films. The Dark Age, also known as the Bronze Age, spans the years 1970-1988, the immediate period following Walt Disney’s death in 1966 and ending with the release of Oliver & Company (1988), which preceded The Little Mermaid (1989) and the start of the Disney Renaissance. This 18-year period was chaotic to say the least as the company struggled to find it’s footing after Walt’s death. With a stronger focus on other ventures such as the launch of Walt Disney World in 1971, the animation division fell by the wayside, and animators began to option and create more obscure stories to turn into movies. Of the 8 films comprising the Dark Age, the animation had a sketched, almost surreal-looking vibe in some instances, and the films themselves proved to be less whimsical and more serious. But with this in mind, the Dark Age has developed a large cult following over the years, including high praise from yours truly. So let’s take a look at each of these films to discover how indifference and reputation has led these Disney entries to be underrated and forgotten.

The Aristocats, in all honesty, is certainly not along the lines of a Pinocchio (1940) or the film that preceded it in the Disney animated canon, The Jungle Book (1967), but if you can overlook the garish animation quality, it’s really a decent film. The film was approved by Walt Disney himself in 1962, therefore, it has his influence in some ways, but the final product lacked any of his imprint, and this was bound to be noticeable. But despite all of this, recent assessments of the movie have pointed out the film’s unique characterizations and the film’s gritty, urban setting as progressive steps forward for the animation division outside of toddler fare.

If The Aristocats was an example of rough 2D animation, then Robin Hood was certainly the film to continue this trend with the House of Mouse. The 1970s were a transitional decade in American culture, and Robin Hood is an example of a downward transition in once beloved cultural institutions, such as Disney animation. Of all the Dark Age films, this one is quite possibly the one that deserves it’s reputation: the animation, voice acting, music, tone, and storytelling are all like an animated acid trip indicative of the era. Even though the movie is subpar, it still has a loyal and devoted fanbase, but I will save my Dark Age fan rant for The Black Cauldron.

The Many Adventures of Winnie the Pooh (1977)

Much like the Disney animated films of the World War II Era, The Many Adventures of Winnie the Pooh is a “package film” in how it is really 3 short films wrapped around a live action framing device. As three separate shorts, each brief movie has the classic charm and warm hues we have come to expect from Pooh and his friends, but there is something complete and refreshing when viewing all three films together within the framing story.

The Rescuers was Disney’s confirmation that it was moving with the times. This animated opus was set in the modern era, and even went so far as to include symbols and metaphors exploring politics, adoption, and even child abduction. Madame Medusa is in many ways, a rip-off of Cruella De Vil from 101 Dalmatians, but she has her unique and zany moments in what was truly a disappointing decade for Disney villains. Overall, this movie is one of the most endearing for young audiences within the Dark Age, and it’s message of finding family in the most inopportune of places and circumstances resonates to this day.

Disney entered the decade of excess with a simple story about friendship between rivals in The Fox and the Hound (1981). This film is notable as the first Disney film to feature contributions from Tim Burton, even though none of his work would ever make it onto the screen. Like The Rescuers, this film as featured some important themes with it’s story including overcoming differences, the cruel twists of fate that pull individuals apart in life, and the fragility of the natural world and humanity’s often chaotic interference in nature.

In the history of Walt Disney Animation Studios, perhaps no other film has been as controversial and jarring as The Black Cauldron. After a troubled production history that lasted 5 years, Disney’s first ever PG-rated animated film opened to audiences in the summer of 1985 to expected mixed reactions. The film is dark, and the animation and characterization of the Horned King is certainly guaranteed to frighten toddlers, but for others, this movie is a classic that represents Disney’s brilliance when it decides to explore bold subject matter. Although the movie tanked at the box office, it is now a cult classic and may soon receive the live action remake treatment normally reserved for Disney’s more prestigious animated outings.

In what industry executives saw as a breath of fresh air after the controversy of The Black Cauldron, Disney released The Great Mouse Detective in the summer of 1986. This film marked a return to the whimsical feeling of Disney animated musicals that many felt had been missing for decades. Although not a box office smash, this film was charming and refined thanks to its late-Victorian England setting and Sherlock Holmes-inspired story and characterizations.

The final film of the Dark Age and the film that precedes the Renaissance, Oliver & Company is one of the most overlooked of Disney animated films. The film is set in modern, 1980s NYC and is inspired by the story of Oliver Twist, only with dogs and cats playing all the parts in typical, anthropomorphic Disney fashion. For many, this movie was simply not memorable enough; there was too much focus on corny jokes that went offer children’s heads and made juveniles and adults wince in cringeworthy fashion. The catchy songs and gritty animation are stellar in retrospect.