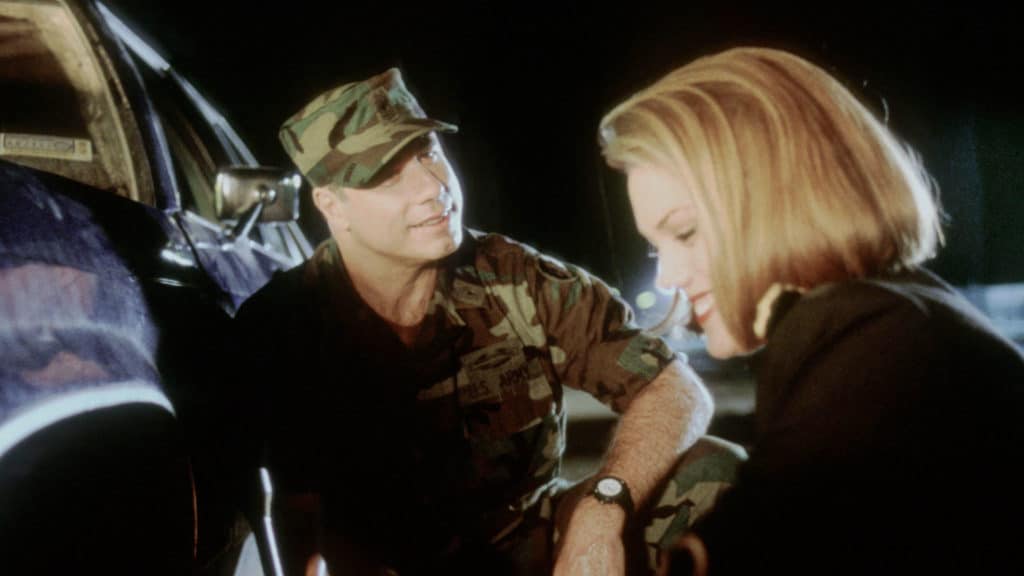 John Travolta’s career has been one that’s been kind of interesting to watch over the years since he’s been front and center where everyone can see him at times, and then he’s been quiet even if he’s been working since there are plenty of movies that he’s been a part of that a lot of people didn’t know about. But this one, in particular, The General’s Daughter, is one of those that appears to be something that might have been overlooked by a lot of people for a number of reasons, especially since it was blasted by the critics for a few different reasons. One is that apparently, the acting wasn’t good enough for a lot of people, which is laughable since there were a few great actors in the movie such as Travolta, James Cromwell, Madeline Stowe, Timothy Hutton, and a few others that people tend to like. Another reason is that there was a death scene that appeared to be too graphic for some folks, though one has to wonder what they were expecting given that the story was about the death of the titular character.

The story is told from the point of view of Chief Warrant Officer Paul Brenner, Travolta’s character, as he’s in the middle of an illegal arms sale when we first see him and is undercover to bust those that are involved. When a self-proclaimed freedom fighter attacks Brenner on his houseboat the freedom fighter is killed, and Brenner is pulled off the case and put on something else, which is the investigation into who killed Captain Elisabeth Campbell, the character that is the subject of the story. What he finds is that she’s the daughter of the same general that he served under, who is played by Cromwell. But what he also finds during his investigation is that Campbell, who he met only a short time before when she helped him with a flat tire, had been leading a very secretive and perverse sort of life when not performing her duties as a PsyOps officer.

Maybe it’s the sexual content that disturbed some folks, since it’s discovered that while attending Westpoint, Elisabeth was brutally raped and left for dead during a night exercise. Her life obviously took a very serious turn after that, but it might have been salvaged had her father not been convinced to put the reputation of Westpoint ahead of his own daughter’s welfare. Telling her to forget that the incident had ever happened was worse than killing Elisabeth, it was essentially the same as telling her that she didn’t matter to her father as much as his reputation. Those that want to say that the acting wasn’t great enough in this movie might need to watch the flashback scene between Captain Campbell and her father, and see the light leave the character’s eyes the moment that her father tells her to forget about what happened to her, and then they might think twice about how great the acting really was. But as Brenner and Sunhill, who’s played by Stowe, continue to uncover the secretive parts of Elisabeth’s life, they find that she was sleeping with the majority of the General’s male staff, as well as a local deputy that was just for show. In other words, Elisabeth was getting back at her father for trying to make her forget about the incident at Westpoint.

When it’s revealed that Elisabeth reenacted the rape on a training site with the help of her commanding officer, it’s also discovered that the relationship between father and daughter deteriorated long ago, likely the same night that he visited her in the hospital. At this point, it’s tough to feel entirely sorry for the Captain since she’s taken that hurt to a very dark place and done whatever she could to humiliate and embarrass her father, and he hasn’t taken any of it seriously and has at that time even asked her to resign or simply admit that it never happened. Imagine that, a father telling his daughter that the most traumatic experience in her life never happened. But it all comes to a head when Brenner and Sunhill find out that it was Timothy Hutton’s character, Colonel Bill Kent, that actually killed Elisabeth after he discovered her on the training site.

There’s plenty of material that’s rather disturbing in this movie, but it was a well-told story and something that could be credited as something that would be a sensitive subject in the military, even now. But as far as the efficiency of the movie it was straight to the point most times and kept its secrets just close enough to the vest that it was an interesting reveal when everything was over and done with. There are times when critics don’t know everything, and it’s usually revealed in the movies they like the least.