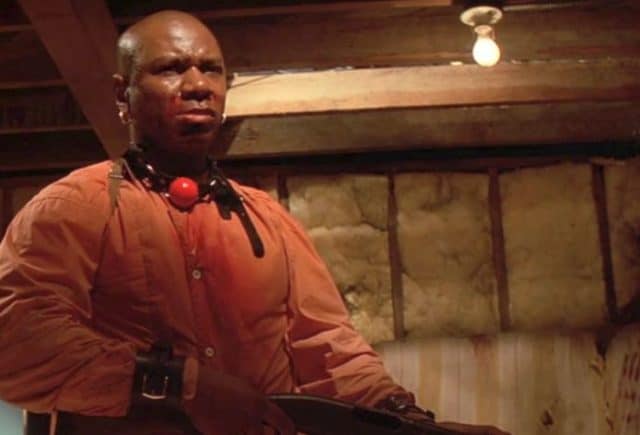 Ving Rhames has the meats! Sorry, I saw that somewhere and I had to get it out. Ving Rhames has that deep, bass voice that is hard to mistake for anyone else and an acting style that kind of leans towards a more serious character more often than not. He can play a bit of comedy now and again and he can be funny, but it’s more often that you see him as a serious or seriously demented character that knows how to get physical when he needs to and otherwise just seems like the guy you obey or the guy you stay away from based on the kind of character’s he’s played in films. Some of his best roles have made him seem a little less than balanced.

But there’s a reason those are some of his best roles after all.

This might not have gotten the respect it deserved but it did spawn three or four sequels with Scott Adkins. In this original version though George “Iceman” Chambers is a flat out jerk that doesn’t care about the fact that he’s in prison, he’s still going to try to be the top dog no matter what. The only issue that the current champ isn’t about to see things that way.

Nathan “Diamond Dog” Jones is somehow one of the craziest people on the plane since he doesn’t show his crazy all that often but it comes out at the strangest times. During the initial riot that aids the convicts in taking over the plane he’s a madman as he does his best to offer up a distraction before getting tased over and over again. Plus I didn’t know until that point that you could kill a man with an an open handcuff.

This is where he gets kind of scary but awesome since Kenneth is no-nonsense and will straight up kick a guy’s butt if he so much as twitches the wrong way. He’s not a violent person but he’s not shy when it comes to dishing out the pain. For much of the movie though he’s far more reserved, though you can see the call to violence simmering in his eyes.

You wouldn’t think that you could see Rhames as a tech nerd but he pulls it off beautifully in the Mission Impossible series since Luther really isn’t a fighter. He’s a wizard when it comes to computers but he’s never shown that he’s much good in the field. If it’s something to do with a computer system he’s great, but other than that he’s kind of comic relief.

Marcellus is one of the last guys you want to cross in this movie. He might not be able to take the likes of Butch on his own but once he has a gun in hand you’ve got about a half second to kiss your butt goodbye if you’re on his hit list.

If he’s in a good mood he seems like a nice guy, but if he’s got the full scowl on it’s safe to say that the boogeyman might go running.