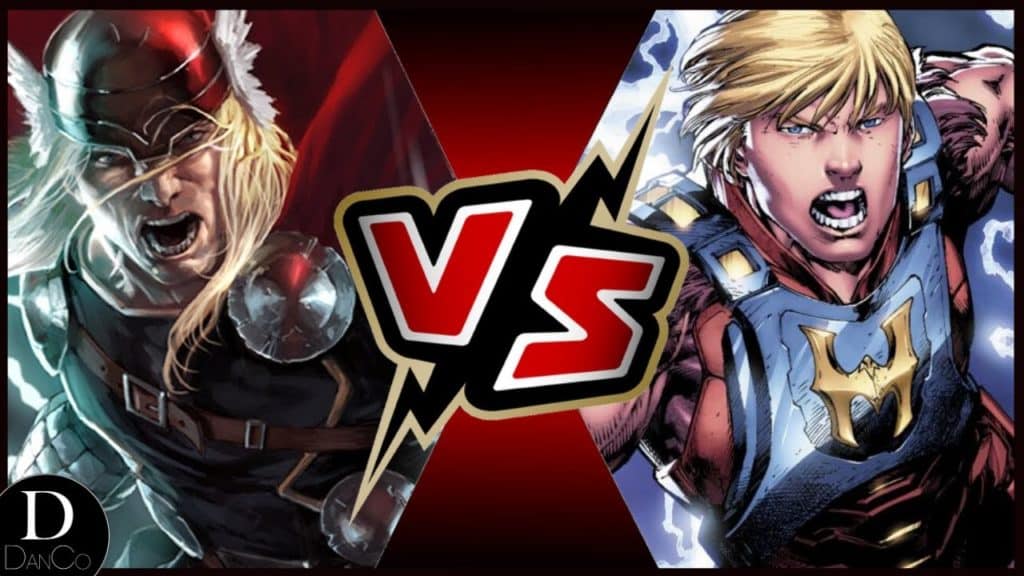 It’s kind of amusing in fights such as this, or hypothetical fights at least, that many people tend to stand up and make their voices heard since personal biases are revealed in a big way and those that happen to like one combatant or the other will bring up every possible power they can to explain why their favorite would win. But in an attempt to be practical, let’s start out by saying that Thor of the Marvel universe and He-Man are both incredible warriors that are insanely strong, quick, and intelligent enough to make the battlefield and any given situation work to their advantage. That’s enough to state that this battle wouldn’t be an easy win for either individual since both are essentially barbarians and have a very good chance of bringing such an insane amount of power to the battle that a deathmatch would be enough to tear apart whatever world they happened to be on at the time. As far as being able to count on backup, both could bring the heat in a big way, but in a deathmatch, it’s one one one, so that kind of narrows things down just a bit.

Breaking it down, both are experienced, powerful warriors that are intelligent and fully capable of stomping opponents that are well beyond the capabilities of many other individuals. Thor is the Asgardian god of thunder and lightning, while He-Man is the alternate identity of a young prince that wields the sword of power and is backed by Castle Greyskull. When it comes to endurance and the ability to outlast an opponent, both heroes can go for quite a while before growing tired. But where He-Man might be outmatched is that even with the power of Greyskull, he does have limits that will force him to revert back to the form of Prince Adam, who can’t hope to take on Thor without an army in front of him. This one failing is a bit of the edge that Thor has over He-Man, and it’s not much since this would be a seriously intense fight if it ever happened considering that both men have the weaponry and capability to give each other a serious run.

This fight wouldn’t be an easy one in any sense of the word, though some are of the mind that Thor would smash He-Man without mercy. Being a little diplomatic, it doesn’t feel that it would come to that since Thor would take the win, but only after a truly epic clash that would be great to see since it would likely put to rest the idea that some have of He-Man being able to beat absolutely anyone. Plus, there’s the idea of which version would be going up against which, since Thor has taken on a few different looks in his time within the Marvel ranks, and it’s fair to think that King Thor, or Rune King Thor, would have little trouble taking down He-Man in any incarnation since once Thor becomes more akin to his father, Odin, the power he holds is so intense that simply drawing his weapon could send many enemies fleeing for cover. But given an even battlefield and being allowed their weapons, it feels as though Thor would take the fight due to the fact that between their weapons, Mjolnir has a few more capabilities than He-Man’s sword.

In the end, it would be up to who’s writing the story and what they wanted to use from both characters, but it is enough to say that both warriors would be hurting by the end, since despite his vast experience and extreme durability, Thor can likely take more than He-Man can, and in terms of strength, both are hard to gauge since they’re powerful enough to tear worlds apart if they really get going. One advantage out to the few that He-Man has is that Thor can fly into a battle rage at times, which makes him a lot tougher, but a lot more careless as well, meaning that he is out for blood and doesn’t think as clearly as he does when in full control of his senses. But even then, given Thor’s speed, strength, and durability, He-Man would have to think quickly and on his feet in order to keep the thunder god at bay long enough to come up with a plan.

When talking about overall speed though, it’s kind of funny to hear people talk of how He-Man is too quick for Thor. The god of thunder is actually quite fast when all is said and done, as he’s kept up with some of the most skilled opponents in the Marvel universe, and when it comes to perceiving things that are moving too fast for human eyes to track, Thor is fully capable of such things. At the end of the day, I give this Thor, but the fight would be a tough one for certain.