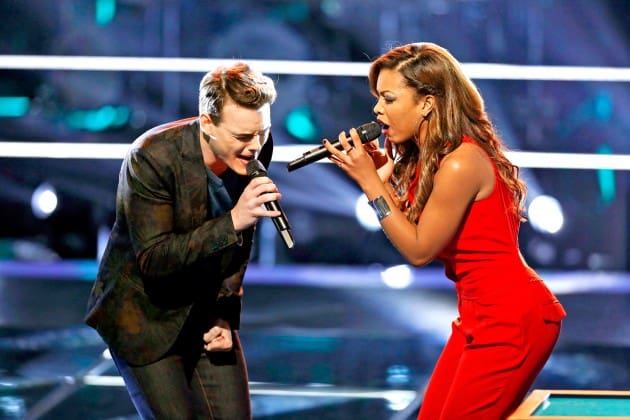 Last night’s episode of The Voice pitted similar contestants from each team against each other, as the coaches had to continue cutting their teams in half. They only have room for one person with a certain kind of style, and even if both contestants are fantastic singers, they can’t both remain in the competition. This led to even more difficult decisions for the coaches as well as emotional performances from contestants as they fought for their life in the show.

Up first was Team Pharrell’s Briar Jonnee and Caitlin Caporale, both women who have incredibly strong voices, able to hit some impressive notes. Briar came out on the stage a bit nervous, though, and because the two were so similar otherwise, it was probably those nerves that cost her the battle. With only a few steals left, the coaches are waiting for something truly unique and special, and Briar’s performance just wasn’t enough.

Next up was Barry Minniefield and Jack Gregori from Team Adam, two of the older contestants this season. Jack has a strong lower register but lacks the natural charisma and stage presence of Barry, who is well-versed in performing. For Jack, who is originally a country singer, the song was a bit less comfortable, another thing that hurt him during the performance. Neither singer brought anything special to the table, and Barry, the winner of the battle, will almost definitely be eliminated during the knockouts.

Christina’s first battle of the night matched Katelyn Read against Treeva Gibson, both sweet girls who had trouble finding the emotion of the song and lacked the passion that takes a song from good to great. Instead, the performance remained fairly flat and boring, with a big note at the end winning the battle for Treeva. This marked the second pairing of the night where the outcome didn’t really matter, as the winner is unlikely to make it much farther in the competition.

Team Pharrell took the stage next, with Kimberly Nichole facing off against Lowell Oakley, leaving their coach with one of the toughest decisions of the night; or at least the decision that took the longest to make. In the end, Pharrell made another questionable decision, allowing Kimberly to be stolen from him by Christina and keeping the less experience Lowell on his team. Kimberly has a much more natural talent and knows what she’s doing, but Lowell did manage to keep up with her. At the end of the day, though, it would have made more sense for Pharrell to keep Kimberly.

The most even match-up of the night came from Team Blake, as he pitted Brenna Yaeger against Kelsie May. These two are so similar, with their young age and similar voices, to the point that it was difficult to tell them apart. Both came out on stage nervous, but Kelsie was able to hide the nerves a little better, the only advantage she had over Brenna as both were incredibly even everywhere else. There was only room for one of them on Blake’s team, and it had to be Kelsie.

By far the most interesting battle of the night came from Team Christina’s Clinton Washington and India Carney. Clinton had been montaged in the blind auditions and had only turned Christina’s chair, while India had been one of the few to turn all four chairs. It seemed like a safe bet to assume she would wipe the floor with him. However, this wasn’t the case, as Clinton rose to the occasion and proved why he deserved to remain in the competition. Their performance together was emotionally charged and very compelling, but it was no surprise when Christina picked India, whose incredible voice and experience gave her the edge. Clinton managed to impress the coaches enough to get Adam and Pharrell both attempting a steal. In the end, he went with Adam, who he believes will teach him the most.