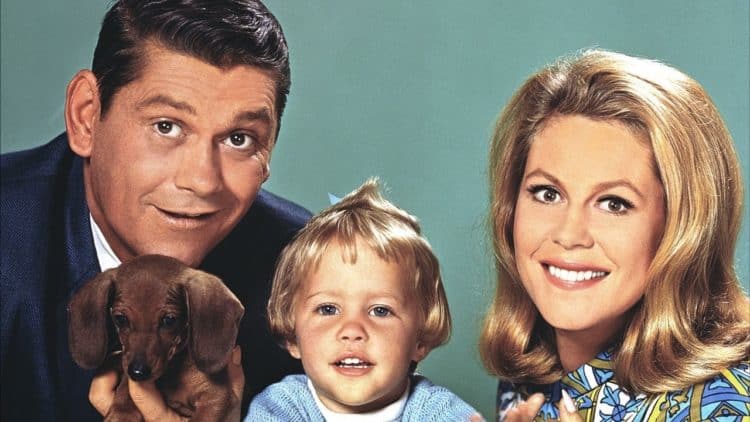 Some actors grow disillusioned with their roles on TV and want something more, while others might find themselves in a dispute over money, screen time, or something else. But Dick York, the first Darrin on Bewitched, thankfully didn’t have any of that, at least not that people heard of, as his exit from the show came due to an injury and the results that came later as a result of the injury. Apparently while filming a movie titled They Came to Cordura, York was injured when someone, one of his fellow actors, performed a move that wasn’t unexpected and left York with a severe back injury. As any stuntperson the business could tell you anything that happens unprepared has a higher risk of injury than a stunt or action that is scripted and has people plan in advance for it to happen. The human body, resilient as it is, doesn’t normally respond well to quick and unexpected motions that tweak it in ways that it wasn’t prepared to go. Because of this back injury however his time on Bewitched was great affected as he couldn’t walk fast or run anywhere and he had to spend a lot of time seated in many scenes. Imagine being part of a show where people expect you to be energetic and full of life and this is next to impossible since you can’t move on account of the pain.

Eventually York would struggle with an addiction to painkillers that would in a sense keep him from the show and would end up getting him replaced as he couldn’t fulfill his obligations. Dick Sargent was brought in at that point since York was in constant pain and had to be kept in recovery. His reliance on pills was too great at that point to mount any sort of a comeback and the actor even admitted to having hallucinated more than once thanks to so much of the stuff that was in his system. It’s saddening really to think that a career was cut short by one injury that turned into an addiction, but it’s not the only time it’s happened and it probably won’t be the last since the saying ‘stuff happens’ is something that people don’t always like to hear, but it’s the unvarnished truth since there are plenty of moments that people just don’t see coming and instances in which a career can be clipped off at the knees without any warning at all. York did attempt a comeback once he was able to get on his feet, but nothing really opened up for him at that point and it was a bit obvious that his time had come and gone. The trouble with staying of acting so long, even in today’s era, is that people tend to forget a lot of what the actor has done and will seek out new forms of entertainment.

At one point York, who had been a three-pack a day smoker for years, developed emphysema and as a result his health started to deteriorate rather quickly as he passed away in his 60s. While his career was something of a tragedy the upside, one of the few that people choose to remember these days, is that he didn’t quit Bewitched and there was no real desire to replace him until there was no other choice. His back problems and then his dependency kind of took that choice and made it a necessity. Somehow though, if one can believe this, a lot of people barely noticed when York was replaced by Sargent, as the different apparently wasn’t so great that people were willing to complain about it. At some point the show started running into a few problems here and there anyway and eventually it was taken off the air and later on played on Nick at Nite and a couple of other stations. Realistically it was a fun show and there was a lot to like about it, but as it happens with many shows, money became an issue, time spent on set was an issue, and things kind of piled up after a while until everything kind of came tumbling down. It might sound a lot more dramatic than what it is, but people tend to become invested in their shows and when they’re taken off the air some folks don’t pay much attention while others experience a type of breakdown as they have to find something to do with their time after this.

If not for his back injury it’s kind of easy to think that Dick York might have been able to keep going with the show and possibly move on to something else once it had run its course, but hey, things happen sometimes, not always for the better, but they happen all the same.