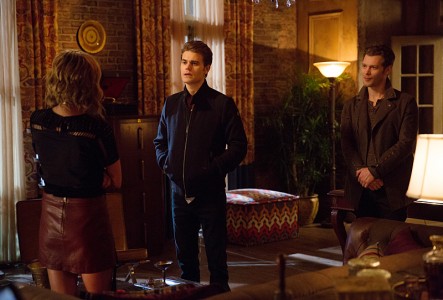 The term “crossover” to describe The Vampire Diaries and The Originals tonight is a very loose application of the word. Technically the two series only converged on one specific storyline with Klaus and Stefan sharing the most interaction. In this second hour of their social catch-up, Stefan plays a key role in saving Klaus’ life.

You’ll recall last week ended with Aya proposing an alliance with Aurora. Naturally strong-willed vampires tend to be very selfish when it comes to grand master plans to take down a common enemy but these two manage to work something out with the help of the Strix witches. Their goal is Klaus, because why wouldn’t it be? Ultimately they want to unlink the sire bond between all Original vampires and their lines but they’re so eager to get rid of Klaus no matter the cost. Elijah is roped into their plan too because if he wasn’t he’d be a worthy opponent to save his brother.

Physically Klaus and Elijah are being prepped for their ultimate downfall at the hands of the Strix if and when Davina successfully unlinks the sire line. Mentally they’re trapped in a ghostly realm with the spirits of Aurora and Tristan there to witness their deaths. Sounds like a whole lot of fun if you ask me. Elijah never hears the end of their whining, especially from Tristan all but treating him like a deadbeat dad.

Real-life couple Paul Wesley and Phoebe Tonkin’s characters of Stefan and Hayley shared a nice scene for the first time – locked in a trunk of all places. Discussing what they’re both fighting for and the brotherly bonds, the two strangers sure seem ready for this battle they know they may not stand a chance at winning. This is where having an ancient vampire hunter after you comes in handy because Stefan wipes away the dried cloaking clay Freya put over his phoenix sword wound and in doing so, lures Rayna to where they need all the help they can get to save Klaus and Elijah. Something tells me she’s no stranger to the Mikaelsons but it’s a miracle she doesn’t have a personal vendetta against them instead of just having a history with killing some of Klaus’ best friends in the past. Knowing that Rayna is a bigger threat than ever 3 years down the line, I have no clue how they can ever be rid of her for good.

Klaus and Elijah springing out of the pool was awesome choreography. Even better as it was cut showing the effects of Davina’s spell on Stefan and Lucien in separate locations. Now that Klaus’ sire line is broken, he’s the most vulnerable he’s ever been. This certainly explains why he goes into hiding any time now, since according to the waitress Caroline meets in the future, no one has seen or heard from Klaus in 3 years. It’s unlikely for him to give up without a fight but Aurora already touched on his deepest insecurity that the only reason anyone fights for him was because they had to do so to protect their own lives.

In the process of Elijah and Klaus’ torture and bloodletting, Davina had an ulterior motive this whole time. She saved droppings of their blood to use in her spell to resurrect Kol. I don’t know how I feel about him being back. Now just doesn’t seem like the time for it. Aurora and Tristan are taken care of, but there’s still the prophecy to worry about and literally no one should be trusted. Maybe not even Kol.

Truly the best part of this crossover event was the chance for old friends Stefan and Klaus to catch up. They even talked about girls, namely the one they have in common: Caroline. Stefan promises Klaus he’ll do right by her even though I think he already knows what that means. He doesn’t know the full extent of her instant connection to the babies because he doesn’t even know she’s in Dallas right now. I get the feeling she’s not coming home, at least not permanently and not any time soon. Did anyone else notice a nice connection between Stefan and Freya for the brief time they spent together? She was introduced as Klaus’ “brand new older sister” which made me laugh but she really seemed to take an interest in Stefan. Not sure when their paths will ever cross again but it would be interesting. Dare we start a new ship name for them? Streya sounds good.

In return for his wise advice about Caroline, Stefan asked that Klaus does right by Hayley too. I’m pretty happy with where Klaus and Hayley are in each other’s lives now so I don’t see any room for improvement on how Klaus treats her. There’s certainly nothing romantic to speak of between them, but there is a familial love and mutual respect for the sake of their daughter.

Klaus’ life hangs in the balance in this second half of the Vampire Diaries and The Originals crossover event.