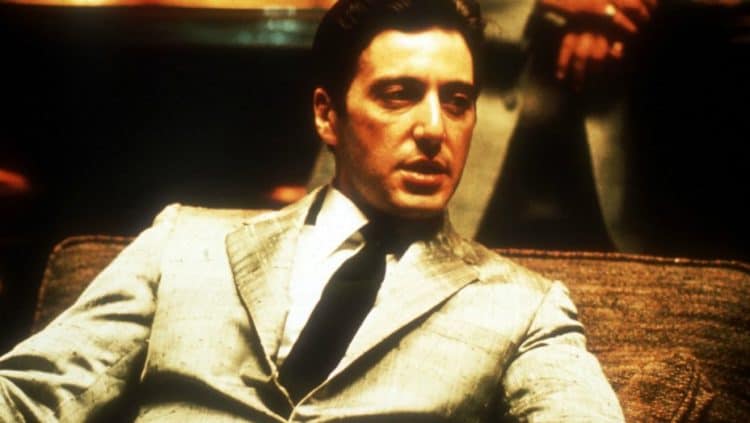 Al Pacino has starred in some fairly controversial roles throughout his career and quite honestly he’s knocked them out of the park despite the fact that he’s also been involved in whitewashing when it comes to certain parts. Just think though, if the roles he’s been in had gone to someone else the movies might not have grossed nearly as much and cinematic history might have forgotten them altogether. The roles that were definitely designed for him however were those that remain great to this day and are characters that are remembered for more than one reason. Pacino is the kind of guy that can be calm, quiet, reserved, and even the best buddy that you never had. But once he goes off the hook and starts shouting it’s an instant crazy that a lot of people wouldn’t want to be anywhere near.

Here are just a few of his best movies throughout his career.

A lot of stuff that’s earlier work of Pacino’s is great since it was the beginning of someone that was bound for glory and was meant to be great. In one of the biggest and most horribly botched bank robberies in film Pacino portrays a man that’s attempting to steal enough cash to get his transgender wife the operation that’s needed to become a woman. The robbery goes so horrible however that the third accomplice flees immediately and their activities are noticed by the business across the street, thereby alerting the police and ruining the whole thing. When Sonny and Sal try to get away though Sal gets shot in the head and Sonny gets sentenced to 20 years in prison.

“Every dog has his day.” This is one of the truest quotes from the movie since it describes Tony Montana in more than one way. Before he rose to prominence Tony was little more than an assassin for hire, a street mutt that could be picked up for pocket change and was highly expendable. The moment he took over from Frank however was the moment he started flying anything but straight since he became a menace not only to the United States but to all those that stuck with him. His loyalty started chipping away at the edges the more his power grew, until finally he stood alone at the end, taking on a ragtag army sent by his former business partner.

Serpico did everything right, he followed the rules, he didn’t fall into the mess and corruption that plagued his department, and for that he was nearly killed and left for dead. When he continued to keep pushing forward however the threats didn’t end as he was one of the only incorruptible cops on the force and as a rule he was a threat to all those that would see him as an impediment to their own greed and corrupted dealings. Because of this he was forced to leave his home country eventually and settle elsewhere in an attempt to have anything approximating a real life. When the whole force is corrupt it’s hard to be the good guy.

At heart he’s kind of a mess, but Frank is perhaps one of the best people in this film since he tells things as they are and not as people would have them. That does make him a few more enemies than other people that try to play to the sensibilities of some, but it keeps things in perspective. He is kind of a miserable human being since he knows how to be a good person but he rarely ever chooses such a path and will gladly tear down anyone that tries to chastise him for it. But he does have a soft spot for Charlie since the young man does put up with him and is at heart a very good person, something which Frank obviously admires just a bit.

There was no way this couldn’t be number one since The Godfather is an iconic and multi-generational role that most people across the years have heard about and emulated in one way or another. Now granted, a lot of folks have taken after Brando’s famous line and might not know Michael quite as well, but given that Pacino’s portrayal of the youngest Corleone male was the most endearing and the most dangerous out of all of them it’s got to be said that he is the heart and soul of the trilogy. It got even better in the second movie and then kind of started to die out in the third, so it’s great that the idea never went any further.

Pacino is the kind of guy you can depend on to deliver a role with the right level of enthusiasm and a performance that’s going to wow just about anyone.