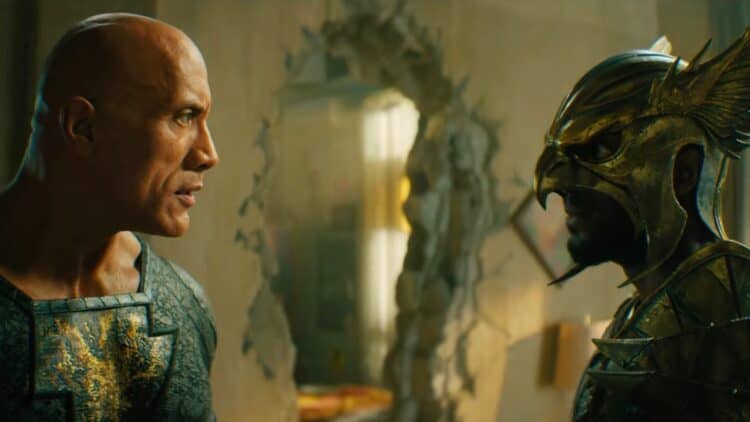 Black Adam was looking impressive enough before the full trailer hit, but now he’s looking even better, and thankfully it would appear that it won’t be all Dwayne Johnson’s effort in the coming movie that will push it forward. Make no mistake, all eyes will be on Johnson for a good part of the movie since he’s not just the titular character, but he’s the most desired actor in the movie at this time. There are plenty of other big names involved in this movie, such as Pierce Brosnan and Aldis Hodge, but it does feel as though these three will stand out as the stars that people will focus on quite a bit, if only because of their well-known reputation. But there’s already a fairly high level of expectation since looking at the trailer it’s easy to think that people are going to be hyped for a while leading up to the premiere since the action looks to be intense and the acting is bound to be good enough to get people to stay in their seat. On top of that, it’s a movie that people have been waiting for, so plenty of folks will stay just to make sure they’re satisfied one way or another.

That sounds a little cynical, but the truth is that when movies start being hyped and pushed to the public in this manner it’s tough not to feel at least a little apprehensive since the more a movie is built up, the farther it has to fall when that unfortunate moment comes along. The hope of course is that such a thing won’t happen since it already appears that the movie is going to be all kinds of awesome. At least, that’s what a lot of people are hoping for, and it’s likely that the movie will do everything it can to deliver.

It already appears that we’ll be getting more than one hero and more than one villain and that Black Adam will be straddling the line between the two since he’s not what could be called a conventional hero, but he’s also not strictly a villain as it’s been established. The story of this character is going to be interesting without any doubt since as a man that’s been wronged in the past and had the chance to come back and gain his revenge. This changes up the origin story of the character in a rather significant way, but this is fairly exciting since it indicates that DC is taking another new direction with a character that might lead to a long-lasting retcon that could help to keep shaping up the franchise in a way that will end up being even more exciting than before. The DC movies that have come out in the recent past have been kind of hit and miss in terms of their efficiency and their ability to keep the fans interested, but it would appear that switching things up just enough to be interesting is the goal at this point since Black Adam is the type of character that one can’t help but like in a few ways, even though he’s undeniably problematic when it comes to his views on the world around him.

What’s amusing is that in DC there are heroes and antiheroes who do get far more violent and have taken the lives of others at times, but there are still plenty of other heroes that would see this as a huge problem since apparently, even the worst villains deserve another chance. Black Adam isn’t exactly the forgiving type, and it’s fair to state that it will take a concentrated effort to get him to see the value of saving lives when he’s so intent on taking them. With that being said, he’s a new type of character that’s going to be interesting to watch since he’s not entirely bad and he’s definitely not a do-gooder. Plus, there’s not a lot that can stop him, other than characters who are more powerful than he is. Those appear to be in short supply at the moment in the DC universe since much like the MCU, not everyone has been introduced at this time.

If Black Adam proves to be successful though it does feel as though the future of DC could become a little more secure as the months and years roll forward. One big problem with a lot of comic book movies is that while there’s a lot of material and plenty of opportunity to tell a great story, there are so many conflicting retcons that have to be taken into account. One can easily imagine that a lot of fans will be commenting on Black Adam’s origin, his appearance, and many other things that will be shown in the movie. But at the very least it’s wise to have an open mind, especially since the reality of a comic book movie is that the majority of them will never match up to their comic book counterparts in every detail.