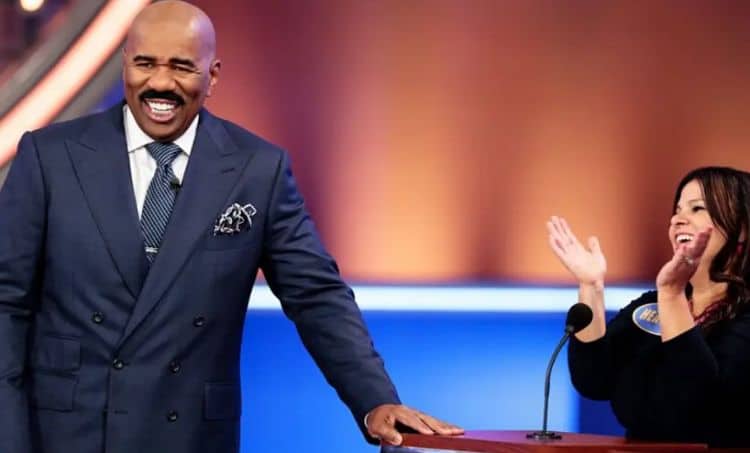 In the entertainment industry, having a career that spans decades isn’t an easy thing to do. It’s even more difficult to have a decades long career in which you’re able to remain relevant during every decade. Still, though, Steve Harvey has found a way to do just that. Steve is the definition of a person who can do it all. He began his career as a stand-up comedian during the early 80s; eventually becoming one on the Kings of Comedy. During the 90s, he had his own sitcom called The Steve Harvey Show which ran for six seasons. In the 2000s, he appeared in several movies including Johnson Family Vacation and Love Don’t Cost a Think. Since 2010, however, he has become best-known for his hosting abilities. As the host of Family Feud, Harvey brought a nice modern touch to the classic game show. The opportunity has spawned into other hosting gigs within the Family Feud franchise, and it’s clear that Steve Harvey is making bank. But just how lucrative is being a game show host? We’re about to find out.

How Steve Harvey Landed The Job On Family Feud

Family Feud debuted over 40 years ago. Over the years, the show has seen a handful of hosts. Prior to Harvey, the show was hosted by comedian, John O’Hurley who had the role from 2006 to 2010. Although it wasn’t initially clear exactly why O’Hurley left the show, he touched on his reasons during an interview with Fox News in 2017. Apparently, he felt like the show wasn’t family friendly enough. He said, “I got tired of people writing to me saying that I can’t watch your show. It’s a misnomer calling it that because, it’s not family. It feels like everything became a penis joke and I got a little tired of that. I just felt that there are other ways to be born interesting on television and always trying to push that style of family entertainment. I had a great time doing it, but it was time to move on.” While it was clear that the show would need a new host, most viewers would probably never have thought of Steve Harvey as an option. However, the production team at Family Feud had him in mind.

In a video on his website, Harvey explained how he got the opportunity for the show. He said that when he was asked to do an audition he was initially hesitant. Having seen the show when it was hosted by O’Hurley, didn’t think it would be the best fit for him. He couldn’t see himself entertaining some of the ridiculous answers that contestants tend to give. When Steve suggested that he comment on some of the bizarre answers, he was initially told that he couldn’t make fun of contestants. However, when he did a trial episode his jokes were so funny that the camera crew stopped recording so they could enjoy the show. It quickly became apparent that a funny host was the missing ingredient, and the production team finally agreed to let Steve do his thing, and the rest is history.

How Much Does Steve Harvey Make?

Hiring Steve Harvey to host Family Feud has been a game changer for the show. He has made it a household name and something that lots of people look forward to watching. Admit it, you weren’t even thinking about Family Feud until Steve Harvey started hosting it. With that being said, it’s only right that he be paid handsomely for his work. According to to a source, he makes $20,000 per episode. This means that on average Steve makes more than $3 million per season. Not bad at all when you consider that each episode is only 30 minutes.

While $20,000 an episode definitely isn’t anything to laugh at, it’s still considerably less than other game show hosts have made. The same source says that Jeff Foxworthy was making $150,000 per episode as the host of “Are You Smarter Than a 5th Grader?” However, Family Feud definitely isn’t Steve’s only source of income. In addition to hosting the show, he also hosts his own web talk show called Steve. Throughout the year, he also does speaking arrangements and other events.

If there’s one thing we can all learn from Steve Harvey, it’s that it really is possible to do more than one thing at a time. Sometimes casting a wide net in terms of your career can really pay off in the long run. Thanks to Steve Harvey, Family Feud has second wind and his pockets will probably be forever grateful.