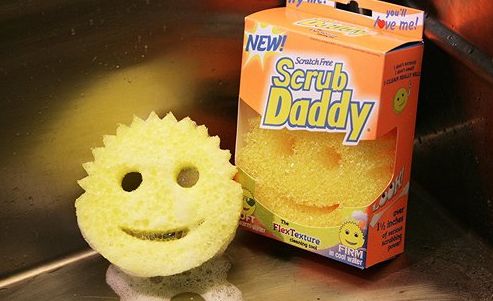 When you think of products that have appeared over the years on a show like Shark Tank, it’s hard to believe that a sponge still remains the most successful product the show’s ever seen.   However, even the sharks will tell you that it’s no surprise at all.  Even though the sponge has a smiley face on it, that’s just the icing on the cake with regard to its functionality.  The Scrub Daddy is a self cleaning sponge that won over Shark Tank investor Lori Greiner back in 2012.  She offered the company $200,000 for a 20% stake in the company.

Since that time over 10 million units have been sold and over $50 million in revenue has come in.   So how does it work?  The sponge is made of a special material “FlexTexture” that changes its texture and function as the water temperature changes.   It has the ability to take the form of a “normal” soft sponge on warmer surfaces and then it stiffens up on colder surfaces.  It’s shape also allows it to dig into a number of hard to reach spots.

The best part about it is the fact that it’s odor-less and it actually washes off clean.  Sounds almost too good to be true but the numbers don’t lie.

With over 2,000 reviews and a 4.5/5 rating on Amazon, the sponge as seen zero signs of slowing down.  Comments have been extremely positive including these couple:

“I was a little skeptical of these ‘self cleaning’ sponges,'” one commenter said. “I use sponges regularly and they always get messy and difficult to work with. It was time to buy some new sponges so I figured I’d give these a try and see if they lived up to the hype. Sure enough, they did.”

“Saw this product on ‘Shark Tank’ before it was popular,” another said. “I’m not big on gimmicks, but this sponge really works.

To quote the animated movie Robots, “see a need, fill a need.”  Smelly sponges that don’t wash off have been plaguing us for decades.  Will you try out the Scrub Daddy?