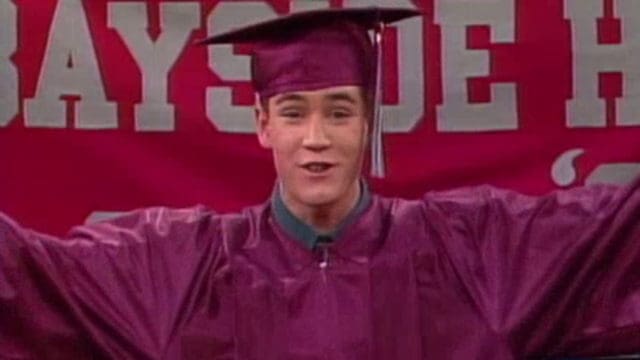 Saved by the Bell just celebrated an anniversary. It has been 25 years since Zack, Screech, Lisa, Slater, Jessie, and Kelly graduated from Bayside High School. The show has lived on in reruns and has more and more fans checking out the wild antics of Mr. Morris and crew. In honor of the anniversary, we are sharing our 25 most favorite quotes from the show that made us believe high school was cooler than it actual was in real life.

1. Zack: You know, I’ve finally found out the best thing about high school, once you graduate you don’t have to come back.

2. Zack: Mr. Belding… quick, you gotta help me. My life is being threatened by one of your students.
Mr. Belding: Just one? You’re losing your touch.

3. Lisa: If you don’t get rid of Linda, I’m gonna throw her out the winda.

4. Mr. Belding: Young lady, the Men’s Room is one of the few doors that education should NOT open for you!

5. Jessie: Slater, haven’t you heard of the Women’s Movement?
Slater: Sure. Put on something cute and MOVE it into the kitchen.

6. Zack: Screech even sold his body to science.
Jessie: Yeah, they gave him twenty dollars to take it back.

9. Kelly: Jessie, let’s go to the Lost and Found.
Jessie: Why?
Kelly: Because you’ve lost it.

12. Jessie: Slater, since we’re together, I think we should share the household chores.

Slater: Sure, you cook and I’ll eat.

Jessie: Sure, I’ll go find one.

14. Zack: Lisa, you are looking lovelier than ever today.

Lisa: Can the sweet talk. You’re giving me a zit.

Slater: Hey. Don’t judge us by our worst specimen.

17. Slater: Guys are great at math. It’s just a shame you weren’t born a man.

Jessie: Yeah. It’s a shame you weren’t born one either.

18. Screech: You girls are lucky. Wait ’til you see me in a wet t-shirt.
Lisa: Only if it involves you drowning.

Ms. Wentworth: That would take a whole orchard, Zack.

22. Kelly: Mirror, mirror from the mall, who’s the awesomest of them all? If you say Jessie, I’ll brain you!

23. Jessie: Look, if you don’t want to hire Kelly as a lifeguard just because she’s a woman, that’s discrimination.

Mr. Carosi: Well, you like to throw your two cents in, don’t you?

Slater: Boy, you have no idea!

Zack: In one word, would I use dope? Nope.

What is your favorite Saved by the Bell quote? Let us know in the comments section below.