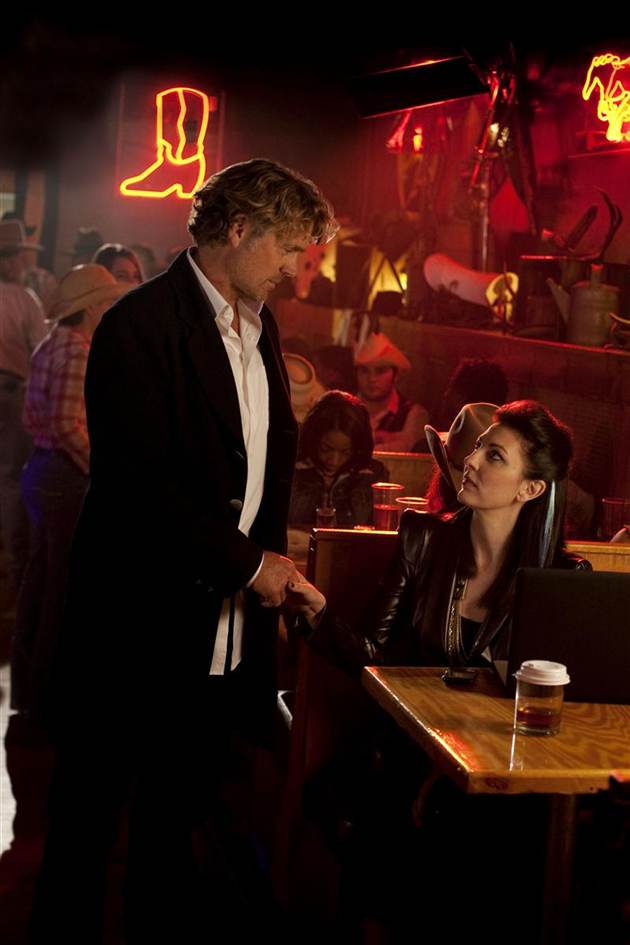 Welcome to the third season of Leverage. In case you forgot, the end of last season saw an injured Nate bleeding on the deck of a boat about to be taken into the custody of Interpol (and his old nemesis James Sterling) while his team fled for their own safety. So where do they all go from here? We’re about to find out in tonight’s doubleheader.

As the title of the first episode suggests, Nate is in jail. Obviously, he’s not going to stay there forever. Meanwhile, his team is in the middle of pulling off something of their own in the courthouse — something which involves Parker sleeping upside-down in an elevator shaft. Why? Because she’s about to free Nate from custody. While she does that, Hardison is setting off car alarms, Eliot is slugging FBI agents, and Sophie gets to drive the getaway car.

But…we find out this is all just a hypothesis. Nate is really in prison, and Sophie is talking to him over the prison phone, with Hardison patching in the dialogue of a Spanish soap opera so he can cover up their conversation. His team wants to bail him out, but he’s intent on serving his time, telling them not to break him out. Which means you know they’re going to whether he wants to or not.

In the meanwhile, a cryptic French woman (played by Elisabetta Canalis, whose best credit is apparently as George Clooney’s girlfriend) wants to know everything there is to know about Nate. She’ll be back.

Meanwhile, the coolest thing in the world happens. Aldis Hodge’s older brother Edwin guest-stars as a prisoner named Billy that Nate befriends, and he’s pretty freaking cool while doing it. He’s got a problem: gangbangers think he killed somebody that he didn’t, and now they want him dead. He’s not even sure why he’s in jail, considering he’s an accountant who just likes bringing lots of beer in his car. But that’s enough for Nate to call up Hardison via a conveniently smuggled-in-kielbasa earpiece to check his records out (‘talkin’to a frickin’sausage’as Billy puts it). Nate agrees to help Billy and Team Leverage has its first new case.

Hardison is dressed up and bugging the warden’s office while even putting on a British accent. The dude is talented (and he’s younger than me!). Meanwhile, Eliot is pretending to be a prison doctor so he can keep an eye on Billy, whom Nate has helped into the prison infirmary (by stabbing him no less). He’s also there to take over Hardison’s role in giving Nate necessary exposition on the corrupt warden and the construction of the prison. Apparently, he also learned Sophie’s real name and isn’t going to tell Nate. Ha.

Sophie and Parker break into the judge’s office and find out four of them opened safe deposit boxes at the same bank at the same time. Hardison quickly figures out the judges are sending prisoners to the prison to keep its occupancy rate up and therefore its funding intact. Those prisoners are innocent people like Billy.

A plan is put in motion. Namely, Sophie approaches the warden claiming she can make him a U.S. Senator. Oh, ambition is never a good thing. We see photos of a candidate with an alleged hooker (which is Parker Photoshopped, and at one point naked, leading to the classic Hardison line, ‘Why am I looking away?’). They get him on the hook easily after that.

Back in the prison, technology fails for once. That never happens on TV. So Nate and Eliot have to map out the prison for themselves to find an escape route. Nobody can seem to agree on a way. Meanwhile, the warden wants Billy dead as he’s the last piece of evidence of any wrongdoing at the prison, and of course we can’t have that. Of course, just as they’re ready to do that, the enigmatic French witch from earlier calls up the warden to have him look into Nate, and Hardison discovers the cameras have all been cut off. Also, he has a new van. Awesome.

Eliot dispatches the guys sent to kill Billy (blaming his alleged sloppiness on new glasses), and Nate and Billy begin to make their escape. This includes distracting the guards with an RC helicopter on the roof, while they get into Hardison’s new super-awesome van…allegedly. When the guards search the van, they just find Hardison and Parker making out. Oops.