Home
Movies
Did You Know “Planet of the Apes” is Based off The Twilight Zone? 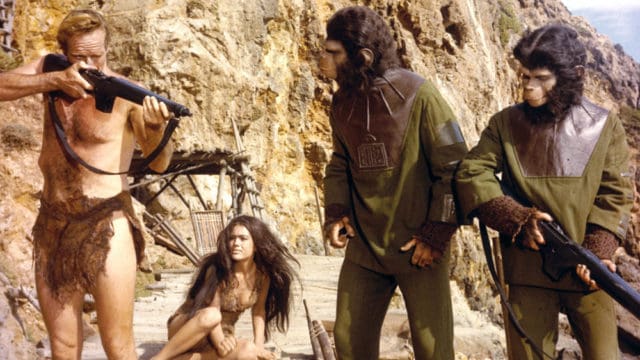 Most of us know that Rod Serling co-wrote “Planet of the Apes'” original screenplay back in 1968. That happened excatly four years after the last episode of “The Twilight Zone” was aired. While most people have pointed out stylistics similarities between the TV series and the film, we are going to go deeper and show that the feature film got its inspiration from exactly six episodes.

Taylor is among three astronauts who are wondering in the desert, thinking that they landed in an alien planet that is desolate and devoid of life. After a while, two of the astronauts die, leaving Taylor as the only survivor, who then learns something that leaves him heartbroken even further. He sees the Statue of Liberty and realizes that all this time, they never actually left planet Earth. Moreover, the human race devolved into a primitive race that doesn’t recognize its former glory.

In “I Shot an Arrow Into the Air,” three astronauts find themselves stranded in a desert, believing they landed on some sort of asteroid. With time, distrust sets in, they turn on each other, and only one of the three survives. As wonders aimlessly, he stumbles on telephone poles and a road sign in Reno Nevada; then tears role down his eyes as he realizes that they never left the planet at all.

The Taylor and his fellow crewmembers are taking a long voyage that will last for centuries. To survive the long journey, they make use of hyper-sleep pods that will allow them to slow down their metabolism and preserve them for years till they reach their destination. Unfortunately not all of them manage to survive the long voyage. Two of the astronauts wake up to find one of the members, who also happens to be the only female died a long time a ago, and her body has been rotting ever since.

The same thing happens in “The Rip Van Winkle Caper” where four thieves after getting away with a heist of gold, choose suspend themselves in animation chambers. When they awaken after 100 years, they are not sure whether it worked or not. That is until they realize that on their gang member’s chamber was breached, and all that is left of his body has been reduced to mere bones.

Taylor leads an ape prosecutor to a cave that has archeological evidence proving that ape were once primitive creatures, and humans were the most intelligent. Once the prosecutor sees the undeniable proof, he orders the destruction of the cave. He reasons that doing so will save his fellow apes from losing their civilization.

A leader of survivors of a nuclear disaster tells his people that “an old man in a cave” is guiding him on what they should eat to avoid eating food contaminated with radiation. After a while, the people revolts and rush into the cave to see the old man. They are disappointed to find there is only a computer, and they destroy it. Without a source of information on how to survive, the eat contaminated food and die.

Taylor comes to a city that is inhabited by intelligent gorillas, chimpanzees, and orangutans; the apes have evolved to a point they can communicate in English. They seize him and place him in a cage where he finds other humans in captive. Unfortunately, they have devolved in Apes primitive creatures and cannot be reasoned with.

An astronaut in “People Are Alike All Over,” lands in Mars and learns that there are creatures on Mars that are just like us. Moreover, they can read our thoughts and are able to speak in English, although he is the first human they have seen. They seize him and lock him in a cage because they believe he is too primitive. This astronaut is Roddy McDowall, who also appears in “Planet of the Apes,” where is takes the role of an ape.

When his ape captors bring Taylor to a trial, he is grilled about his original, and they conclude that he deserves to die. Luckily, he escapes and kidnaps his prosecutor in an attempt to show that the apes are backwards, unjust and hypocrites.

A man living in the dystopian age is on trial for believing in God, where a chancellor finds him guilty of being an “obsolete man.” They sentence him to death, at which point he manages to get the chancellor trapped in the same room with him. As they wait to die together when the bomb goes off, the man hopes he can use the scary moment to proof the chancellor is a coward and the he leads a society of hypocrites.

Taylor is helped by ape scientists to escape, and then as he departs to a different future by going to the Forbidden Zone, he requests to kiss a female ape. The ape agrees but exclaims that he is so ugly! Taylor then ride away with a beautiful woman.

In the “Eye of the Beholder,” a woman who underwent a facial reconstruction surgery that went terribly wrong finds out that she is actually the most beautiful person. The rest are just horribly disfigured. She then meets a good-looking man that promises to take her to other outcasts who have the same looks as hers.

As you can see, it is clear that the above episodes share a lot, which only makes sense since Rod Serling wrote them all.