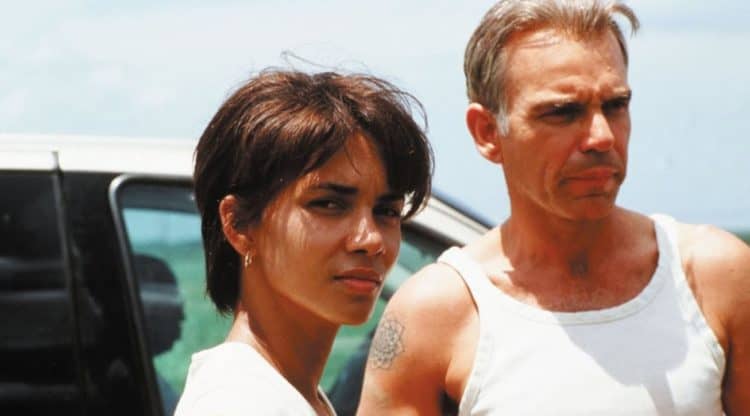 Halle Berry has been held up on a pedestal for quite some time now and a lot of people would say it’s well-deserved while others would say it’s time for her to get down and just ride out the rest of her career being as great as she’s been for so long. Neither group would be entirely wrong since she’s put in a lot of great performances over the years and she’s even given a few flops that weren’t entirely her fault but have a lot to do with writing and the overall makeup of the movie. But while Halle has been lauded again and again for her talent it does seem that it hasn’t gone to her head as she’s remained pretty even-tempered and nicely grounded throughout the course of her career, which is great to see since it’s a bit irritating to see a star really start to believe in their own hype. Thankfully she seems to keep it together when it comes to being an actual human being and not a caricature.

Admittedly this probably wasn’t quite as good as the first one since it didn’t have that element of being seen for the first time, but the action did manage to increase quite a bit since not only did the Kingsman tailor shop get blown up, but they had to travel stateside and discover that they had allies in the Statesmen, a group that was just like their own but had gone into the liquor business rather than tailoring. What was great to note, beside Berry’s inclusion Agent Ginger Ale, was that Agent Tequila, played by Channing Tatum, proved to be more than enough to take on Merlin and Eggsy as he put them both down in short order.

Dirk Libbey of CinemaBlend has written that even the director of the John Wick movies admits that the movies are a bit nuts since they imply that nearly half the population of NYC are assassins just waiting to be activated. No one, not even John Wick, would be able to survive if that happened to be the case, but coming at him in small numbers does seem to give him the advantage. When he has to team up with an old acquaintance however she’s anything but happy to see him since there seems to be an agreement that he would stay away. Desperate times however require desperate measures and John has to rely on a woman that would likely rather shoot him than help him.

This movie might be hard for some folks to follow since it traverses six different plots throughout six different eras. Each story is connected to one another by the thinnest of threads, but they do come into focus as the story finally reaches a close, as Jim Sturgess, Halle Berry, and Tom Hanks are seen to be the main characters, along with Hugo Weaving and a couple of other actors. The story, if you can follow it, is a powerful one that shows the progression of a tale that transcends time and continues to push forward no matter what happens, finding a way to the next destination in some fashion that might not be fully seen by a lot of people.

Ryan Buxton of Huffpost wrote a short bit about the sex scene in this movie between Billy Bob Thornton and Halle Berry, though as Thornton said it was a bit more dark than exciting as the circumstances under which it was happening were a bit dreary. This is kind of to be expected when you’re hooking up with the wife of the man you helped to execute by state law. It doesn’t help that Thornton’s character had just lost his son and was stuck caring for a bigoted father that needed him more than he could really handle. Sometimes though people just happen to be there for each other, no matter how it might happen.

As Matt Golberg from Collider remarks this movie wasn’t exactly true to form of the X-Men that a lot of us can remember from the comics since if anyone cares the original team was Cyclops, Angel, Marvel Girl/Jean Grey, Iceman, Beast, and Professor X. Wolverine and Storm came later, and Rogue came much later and is remembered by many as being inordinately tough and having the ability to fly after coming into contact for too long with Captain Marvel. But of course things have to start somewhere, and this movie was accepted no matter what since it was great to see the X-Men on the big screen finally. As the movies continued however it was enough to think that they could have gotten a few things right.

Hopefully Halle has a lot left to her career.Â  Honorable mention to Boomerang and Jungle Fever.