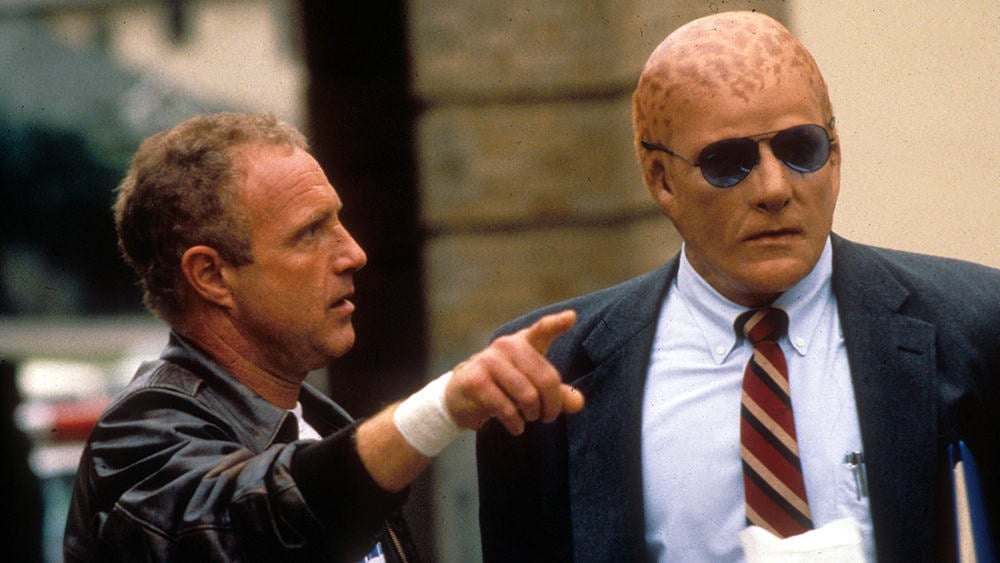 I can’t help but put this out there, but the same guy that played Inigo Montoya in The Princess Bride, Mandy Patinkin, is the guy that played Sam “George” Francisco in Alien Nation. It’s true, and it’s one of the more bizarre parts of this movie despite the many oddities. Almost every alien movie has some strange quirk to it, and Alien Nation had a few of its own since the aliens that came to earth in this movie were mostly of the worker class, as their controllers apparently didn’t give them much more than they needed and kept them hooked on a dangerous narcotic that was potent to their kind but didn’t do anything for humans. The aliens, called the Newcomers, are incredibly smart and tend to surpass humans in intelligence at a very young age as they’re a bioengineered species that are still threaded into society upon their arrival and are highly naive to the ways of humans at times.

A good example is that George doesn’t really understand complicated jokes that aren’t entirely logical.  Another couple of quirks are that they eat raw beaver and can get drunk on spoiled milk, and they have two hearts, which means if they get hit in one they might be hurting but can continue to function. Also, the drug that they were hooked on in the ship that brought them can trigger a metamorphosis if they overdose on it, which is monstrous as it’s shown near the end. But putting all these quirks together means that the Newcomers are, like most aliens, far beyond humans when it comes to what they are and what they can do. In pretty much any alien movie it would appear that humans are outclassed and outmatched in a lot of ways, but this is a little more even-handed since the Newcomers do have a variety of weaknesses that can be exploited.  For one, they have a serious aversion to saltwater as it acts like battery acid to their skin. They’re also able to be taken down by hitting nerve clusters that are on either side of their bodies.

Otherwise, they’re rather tough and can be insanely strong compared to humans. but when Matthew Sykes, played by James Caan, and George stumble upon a possible drug/murder scheme among some of the more prominent Newcomers that George happens to know, they step into something that can potentially blow the lid off of the Newcomers’ status in society, since only a few people happen to know about the monstrous transformation they can go through, and most humans have no idea. As George puts it, such knowledge would jeopardize their entire existence among humans and would make it difficult if not impossible to coexist with them. People are often afraid of enough in their lives, they don’t need to worry about killer aliens walking among them after all. But it’s fair to think that if a reboot ever did come along that maybe this part of the Newcomers’ past would be something that might be hinted at, or kept as a dark secret since it’s something that could drive the plot in a very convincing manner.  There were talks about bringing this movie back, and there was a TV show that was based on the movie that kept moving forward with the story, but it eventually discontinued and people kind of forgot about the whole idea.

Bringing it back feels like it might be kind of a tough sell, but not the hardest thing in the world to accomplish. The story isn’t really that complicated, and while the TV show might have gone into the history of the Newcomers a little more, the movie only gave enough information to realize just who the Newcomers were and how they were fitting into the human civilization. There was a general acceptance of the aliens since humans didn’t actively try to keep them from integrating into society, but there was also a very ingrained sense of discrimination that took place, as Sykes was one of those that didn’t care for the Newcomers and tended to make it known more often than not. But when he’s partnered with George, there’s not a lot that he can do, but he does give George hell for a while.  When the two end up bonding it’s over the fact that George is terrified to think that his kind might be ostracized for what they can become, and he’s also horrified to learn that the drug that he and many of his people were hooked on is being produced somewhere in the city. It’s actually a great scene when he finds the drug lab since up until then George doesn’t show a lot of emotion, but when he gets mad, hoo boy. But a reboot of this, updated for the current era, might actually be kind of fun.