Home
Television
The Middle
The Middle Review: The Hecks Meet the Parents 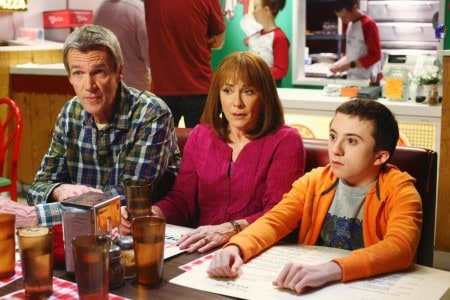 The time has come for Brick and Cindy’s parents to meet on this week’s underwhelming episode of The Middle. Not because they’re super serious at their young age, but more like Frankie feels desperate to socialize with other parents. Her and Mike are sure in for a surprise with Cindy’s family!

Of course Frankie’s first mistake was comparing Brick to Axl. They’re complete opposites, as even Brick later points out. He’s not a jock like Axl so his parents never had any opportunities to meet or become friends with Brick’s friends. Plus, Brick only has two friends, and that’s counting his equally eccentric girlfriend Cindy.

The apple sure didn’t fall far from the tree in Cindy’s family. Her parents are awkward at small talk before jumping to ask for $700 from the Hecks. Brick may be too young to realize what a big deal that is, especially to his parents. He sees the condition of their house, he has to have some idea that they’re not exactly rich. Axl wasn’t around much in the episode but he was there to impart some wisdom to his little brother when he needed it most. “I think for the most part Mom and Dad want to make us happy. I think if there was anything they could do for us, they would. Just not $700.” What a mature response from the same guy who was hitting on his little sister’s roommate earlier in the episode.

As usual, Sue still manages to steal the show with her embarrassing new crush on her professor played by guest star Josh Cooke. When I say embarrassing I mean even I thought it was a new cringe-worthy low for Sue. Luckily Professor Grant takes it all in good stride and doesn’t make a big deal about it. In fact, he sort of helps her move on by setting Sue up with Jeremy, the activist student previously chained to a tree. The episode description for next week’s episode already calls Jeremy her new boyfriend which is a bit of a stretch for Sue to be jumping right into a new relationship.

All in all, this felt like a bit of a filler week in the grand scheme of the season. If everyone took Mike’s advice and stayed home to avoid anything bad happening, then nothing good would happen either. Guess we should appreciate these average moments and episodes of the show because at least they’re consistent with the heart of The Middle.

Sue develops a crush on her professor and handles it in typical Sue-fashion. Meanwhile Frankie and Mike deal with disappointing Brick yet again.