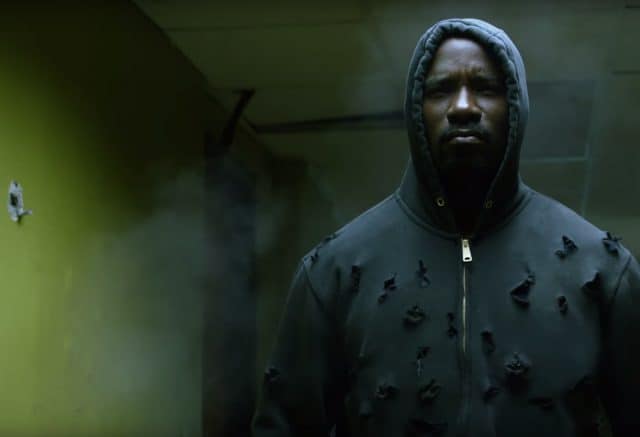 Tragedy as inspiration is a hallmark of superhero storytelling: the sheer amount of dead parents, relatives, confidants, best friends, and children who die to inspire others is a laundry list Marvel nor DC would rather reference. The fetishization of tragedy forming inspiration is a deeply American ideal, the belief that by “always moving forward” (RIP Pop), we can shake off the ashes of tragedy and rise above, finding purpose in the most meaningless, affecting moments of violence, grief, and loss.

There’s certainly truth to Luke’s statement that people often sit back until something horrible happens before acting: and yet, throughout Luke Cage‘s premiere, it seemed this show was willing to buck the trend for once, taking the opportunity to truly make Luke Cage differentiate from the other Marvel offerings on Netflix to this point. Initially, it appeared Cage would be inspired to take on Cottonmouth because of the affect he was having on the community: “Code of the Streets” reveal this to be something a lot more typical, Cage’s desire to shut down Cottonmouth only coming to light when a personal tragedy affects his life directly.

It’s not to say Luke Cage’s career as a “hero” wouldn’t begin with some sort of tragic, awe-inspiring moment: but when Luke Cage openly constructs itself as the antithesis to the traditional, white superhero fantasy, seeing missed opportunities like this, where Cage falls victims to the now-predictable rhythms of a Marvel Netflix series, it’s a little disappointing. Luke Cage most certainly wants to be a voice for a community, a symbol for both progressive social development, and television development, but it doesn’t have a complete grasp on how to control that narrative and sense of cultural importance. For example, the sheer amount of black talent featured in Luke Cage is impressive; for once, it’s nice to see a lot of familiar African-American actors get to share scenes together, instead of isolated across twenty network shows full of white faces. But already, these characters are being corralled into the predictable placement of minority characters in traditional narratives: largely a collection of gangsters, old and young alike with lengthy rap sheets, all fallen victim to two cousins in power (one of many ways Luke Cage ineffectively tries to tap into The Wire) who are essentially using the community they purport to represent, against itself.

Another hint towards Cage‘s leanings is Cage’s costume itself: there’s no denying the power of seeing Cage put up his black hoodie (lined inside with yellow, a nod to the character’s comic roots) and get ready to take down the gangsters who destroyed the one safe place he had, and the one friend he trusted. But that larger cultural context is left feeling a little unsupported by the lack of attention to detail in the narrative construction of the show. On one hand, the fact Luke Cage doesn’t pound its chest about having a bulletproof black hero wearing an evocative hoodie – but at the same time, the abundantly familiar narratives its surrounding those moments and images with seem to run counter to the show’s ultimate beliefs about cultural assumption.

That being said, there’s still plenty of isolated moments to enjoy in both the second and third hours of Luke Cage. Mike Colter is an obvious fit for the role of Luke, able to capture both Cage’s intensity and sense of power, but also the softer, vulnerable side of the character, without a wall of expositional text to bring the dichotomy to life. Cage is soft-spoken, even when angry, and the presence Colter brings to that is fantastic. The same goes for Simone Missick, who like Rosario Dawson in Daredevil before her, turns a mostly plot-servicing role into something a lot more dynamic and enjoyable to watch. Again, seeing Misty go through the normal posturings of a murder detective isn’t exactly the most enthralling material, but how Cage allows Missick to find the nuance within the character, offering her presence in longer scenes and exchanges with characters to help add dimension to the archetype, is really engaging to watch, the one time the show’s relentlessly slow pacing works in its favor in world-building.

Unfortunately, large swaths of the third episode, “Who’s Gonna Take the Weight?”, fail to emulate many of the smaller moments of Luke Cage that really resonate. Perhaps the most frustrating element of the hour is how quickly the show’s established a pattern of images, recycling both itself and other Marvel series: for example, all three episodes have featured Cottonmouth watching a band play, while inter-cutting with other action scenes. This episode also features Marvel’s 29,247th hallway fight between its movies and TV shows, a rule of diminishing returns that robs Cage’s first big set piece of any sort of excitement or momentum (also, how the show artificially adds a Wu-Tang track to the mix is abundantly frustrating: would Luke really go into a fight like that, not being able to hear anything happening around him?).

(I’m not even going to talk about the series of Latino cliches that represented the guy who ate half of two Milky Ways in Cottonmouth’s club. That is just silly).

On top of that, Luke Cage once again tries to present its villain as another “hero of the story” (these are the words of Marvel exec Joseph Loeb), yet Cottonmouth exhibits about 1/100th of the presence and weight of Wilson Fisk, a character and performance that feels way too inspired by the superficial details of Stringer Bell (and we get it, showrunner Cheo Hodari Coker: you’re really into Notorious B.I.G.), and really doesn’t work in creating some kind of existential counterpart to Luke Cage. Cottonmouth feels like a regular gangster stereotype elevated to main villain status, simply for the fact that Luke Cage is 13 episodes long and a Marvel series, and thus demanded to have one overarching bad guy: his presence simply undercuts the power and intelligence of Mariah, the show’s true antagonist, and the one character Cage cannot bring down with just his fists. She could be a real great Cage villain, if only we could take her seriously for continuing to put up with the idiocy of her cousin, who uses her office as a laundromat for his money, and has no qualms with public murder, or the personal use of a bazooka to level a restaurant.

There’s so many elements of Cage that feels baked-in and ready to fire on all cylinders: the cinematography, the scoring (even though a lot of it feels more akin to what I would expect from the Iron Fist show), and the lead performances are all top-notch, able to stand next to the other series Marvel has brought to the streaming giant. And yet, there’s still so much of Luke Cage that feels like half measures (to once again borrow from The Wire), from the underwhelming antagonists, to the ridiculously inept pacing (why have all three episodes opened in media res?), and the creeping feeling that this show was built to fit into the mold of other Marvel shows, not break out of them to be something truly breathtaking. After all, the last words Pop has for Luke Cage are “always forward” – why then, does it feel like Luke Cage is content living in the traditional narratives and rhythms of the series before it? Hopefully, the next 10 hours will go a long way towards alleviating that lost sense of ambition.

Luke Cage’s ambitions are held back by its adherence to the typical narratives, characterizations, and rhythms of Marvel shows in its second and third episodes.