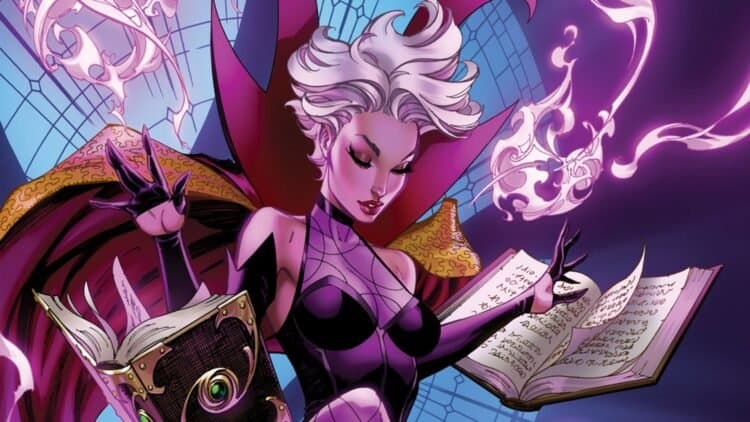 Over the weekend it wasn’t hard to figure out why people were tossing questions all over the internet trying to figure out who it was that had shown up during the post-credit scene with Doctor Strange. The fact that it was Charlize Theron that showed up made a lot of people wonder who in the world was being introduced, but the fact is that a lot of people don’t know about Clea, especially if they don’t read the comics. What’s truly insane about this character is that she’s half-Faltine, meaning she shares a bloodline with Dormammu, the ruler of the Dark Dimension. If you’re wondering why she isn’t sporting a flaming skull it’s because of her half-blood heritage, as her mother, Umar, hooked up with Prince Orini, the son of the former ruler of the Dark Dimension. Their union produced Clea, who lived in the Dark Dimension until one day she noticed Doctor Strange enter the dimension to do battle with her maternal uncle. Growing curious about the mortal she decided to see what he was all about, and that’s how things started, more or less.

It’s fair to think that in the MCU that things arent’ going to head in the same direction since the look that Strange gave Clea before following her made it clear that he didn’t really know who she was. Of course, that could be misleading since it’s not hard to think that after his travels from one dimension to another it’s likely that Strange isn’t bound to be surprised that easily any longer, especially since he had dream walked into a dead body and do battle with the Scarlet Witch. Hearing that his actions created an incursion wouldn’t be that big of a deal at that point, but following Clea into the Dark Dimension feels as though it would be a dubious choice to make. But it does open up the possibility for another movie.

There are a lot of questions to field at this point since Clea’s arrival means another big adventure and it’s fair to think that keeping Strange and Clea close means that Dormammu is going to come back into the picture, potentially, and it’s not likely that the ruler of the Dark Dimension is going to be that happy to see Strange after their last meeting. But bringing Clea into the mix makes it feel as though the mystical aspect of the MCU is only going to broaden since her own skills are considerable, as she did become the Sorcerer Supreme in the comics at one point when Strange died. She even took on Stephen’s last name since they had been married for a while before he met his end. But as one of the more restless characters of the Marvel Universe, Clea is the type that can’t help but want to be who she is, no matter what that means. She did become the Sorcerer Supreme of the Dark Dimension, which could be an element used in another movie that might be seen to make a big difference in how the net movie would roll out. Adding another sorcerer to the mix would liven things up in a big way, but creating a scenario in which Dormammu isn’t the worst enemy would be even more interesting.

The evolution of the MCU is still occurring as Benedict Cumberbatch has leaned into his role in a big way, but how long he’s going to be a part of it is unknown yet since everyone eventually reaches a point when they have to bow out, and it’s fair to wonder if Clea’s emergence is going to force Strange’s story into a direction that might cause the sorcerer to meet his end at some point, while she would take over and assume the mantle. It’s kind of an odd choice to pick Theron, who’s been around for a while and might not have quite as many years left for such a role. But then again it’s not hard to imagine that she could take on the role for a movie, maybe two, and then bow out as another sorcerer would be brought in to take on the mantle. A good replacement might be Magik, who could still be played by Anya Taylor-Joy if she’s still interested.

But for the moment, Clea is a bit of a mystery to a lot of people since she did just show up and a lot of people are reacting to her presence since they know next to nothing about her. Seeing her make her way into the MCU is bound to be interesting if that’s the overall plan though, and seeing how long she can last is bound to be even more intriguing. However long it’s going to take it’s fair to think that people will wait since such a story is bound to be one of those that will turn the MCU on its ear again.