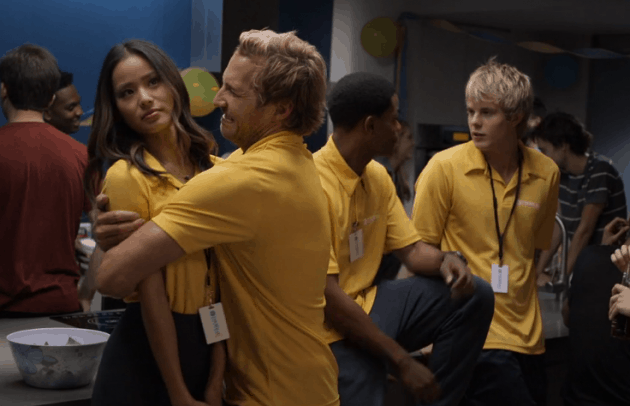 As juvenile as it is low key, Resident Advisors isn’t a show that will blow anyone away. It’s crude, predictable, and packed to the brim with archetypes and stock college plot lines (big party episode, distinguished speaker episode, an episode about college kids sleeping around) – and yet, I burned through the eight episodes available in the show’s first season in a matter of hours. Somehow, underneath the fart jokes and typical bro humor lies an entertaining, even charming little show about two thirty year olds desperately trying to find their paths in life, all while trying to maintain their sanity while living in an expensive dorm hall under the thumb of a demanding school president.

Like any show featuring Ryan Hansen, the best thing Resident Advisors has going for it is his charm. Some might consider Ryan Hansen to be a poor man’s Chris Pratt and think it to be an insult, but his performance as a 30-year-old R.A. brings such humanity to a tired role, it flips the genre on its head. Not only does Hansen’s Doug care about his job, he even cares about his students and co-workers; this isn’t a character who stayed in college because he kept flunking classes – quite the contrary, in fact, which gives a much-needed twist to the “aging party bro” trope we’ve seen so many times. Hansen’s always great at playing this type of character, and while Doug isn’t as clueless as Kyle from Party Down, his lighthearted approach to life is treated as an endearing (though immature) trait, which provides the show with a heartbeat it doesn’t necessarily need, but certainly benefits from.

That’s not to say the rest of the cast is a slouch, either. Even Jaime Chung’s Olivia provides a pretty good straight man for the goofiness of the characters that surround them (played by actors like Juliette Goglia, Graham Rogers, Romy Rosemont, and Vanessa Lengies), as the den mother of the college dorm struggling with her own lack of personal success in life. Save for a slightly shoehorned in “will they, won’t they” story with Olivia and Doug, Resident Advisors is content to let their working relationship set the tone for the first season, with Olivia’s structured approach to life coming in direct conflict with the laissez-faire Doug, whose idea of teaching kids about alcohol abuse is holding a party in the dorm, where he is the only person consuming alcohol (a series of flashbacks in the episode detail his mostly-naked adventures from previous years).

There are moments where Resident Advisors’ laid-back approach to comedy undersells its own merits. The high concept, in media res flashbacks that open each episode (and build to the finale) feels like a serialization Resident Advisors didn’t need, a story hook that feels more constructed than anything else in the eight episodes (and this is a show that spends an entire episode deconstructing Anna Camp’s effervescence), and sits in direct contrast with the comedy presented in the other 21 minutes of each episode. Never an enlightening or inspiring watch, Resident Advisors is another in a long line of Animal House-influenced media; and while it may never have the pathos of say an Undeclared, its touch of heart and comedic sensibilities elevate it above middling entries in the genre (I’m looking at you, Blue Mountain State). There are much worse ways to spend three-plus hours watching TV, and with network shows heading off into the summer sunset, Resident Advisors is a perfect quick fix for those looking for quick, consistent laughs without a lot of emotional investment.