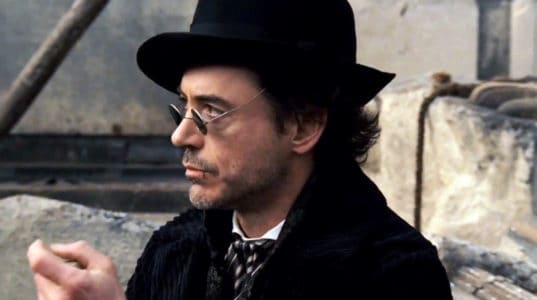 My thanks to Simon Kinnear of GamesRadar for the list he compiled to draw some sort of inspiration off of when it comes to the greatest detectives in movie history. I’m certain that my favorites would be in a much different order than his, and would be a little pickier since there are some on various lists that aren’t exactly trained the same while there are those that just don’t have the same ‘it’ factor that makes them great. The vast number of sleuths that dot the pop culture landscape are great in number since like it or not there are always bound to be cases to solve and men and women that need to solve them.  It’s true that this role has traditionally been held by men throughout the years, but things are changing thankfully since women are every bit as popular in the role and just as capable, if not more so at times thanks to different lines of thinking and perspectives. But for this list only one lady in particular made the cut and it’s largely because she didn’t so much lead the charge as she did redefine the role of women in the FBI during her appearance.

With that in mind, let’s get into who I happen to think are some of the best detectives in movie history.

He’s an addict, a dedicated detective, and has a haunted past that still plagues him obviously since it’s part of the reason he’s become an addict. But the one great thing about Anderton is that once he gets a lead he doesn’t stop with it until he finds what he needs in order to get the job done. He’s a little heavy-handed at times for a detective, but he’s still highly effective when it comes to his task.

Oh yes, I’m going to include comedians as well since a couple of them made damned fine detectives in their time, and Ace was, well, highly unconventional at best but still did his job and was seen to be somewhat successful at times. His methods were a little out of left field to be sure, but he did find things that other detectives didn’t quite often, even if one of the biggest clues had to be pointed out by Dan Marino.

The term ‘overachiever’ has never applied so strongly since Angel is the kind of guy that’s not satisfied until all the i’s are dotted and the t’s are crossed in the correct manner and to his liking. It’s not even ‘good enough’ unless everything is perfect, which leads this character to feel a little stuffy at first. But throughout the movie it’s easy enough to warm up to him since he does change his act a bit.

You had to know that he’d make this list since the late, great Leslie Nielsen was someone that couldn’t go without being mentioned. Another comedic detective, he was kind of a bumbler that came out of nowhere since Nielsen was at one point a very serious dramatic actor. But his turn to comedy was perfect since he was one of the masters of the deadpan method, and very few could do it as well.

Yes, I’m talking about this character when he was being played by Morgan Freeman, since no offense to Tyler Perry, but it’s hard to top Freeman given that his acting ability is perfect for just about anything he’s been cast in. As a detective he’s able to bring a level of intuition, calm, reserved thinking, and patience to the role that’s absolutely great to watch.

This might be be something of a surprise since he’s not technically a detective, but he’s definitely someone that doesn’t stop until he has all the clues he needs in order to find out what he’s set out to discover. As far as the detective angle goes Brendan has the right kind of stuff to qualify, even if Brick is kind of a messed-up movie.

So yes, he’s a US marshal, but he’s like a pit bull that doesn’t unlock his metaphorical grip from a case until he’s well and certain that it’s been dealt with. The manner in which he goes after a suspect is a bit controversial at times, but it works.

Clarice was kind of out her league when she stepped into The Silence of the Lambs, but she handled herself pretty well, especially considering that someone like Lecter could have left just about anyone else a quivering mess had he wanted.

Having been played by multiple actors across the character’s history it’s hard to say who did it best, but this individual has been one of the most renowned detectives in pop culture for a long time now, and for good reason. He’s one of the best at what he does and easily among the smartest of characters in the movies.

This is another character that’s had a lot of different actors take on the role, but there are a few that have done the part a great deal of honor since they either played it to the full potential or introduced a new attitude and edge that wasn’t there before.

Playing a detective isn’t that easy really, as it takes a certain type of individual that can make it work.