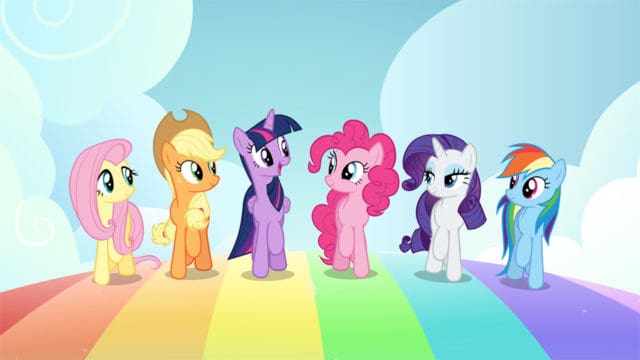 Some of the most entertaining moments on film are when a show gives us those fabulous self-aware moments. Usually, this is the show making some good natured fun of their show and us, the people who watch it. This even happens in movies, like when in “Sixteen Candles” Anthony Michael Hall in the persona of Farmer Ted turns to the audience for reaction or Bill Murray’s audience sings along at the end of “Scrooged”. This trick is also known as “breaking the 4th wall”. Breaking the 4th wall is different than “fan service” in that fan service includes an element as an inside joke to the viewers, but breaking the 4th wall is when the show addresses the audience or has a character reveal that they know it’s a show.

This is true even for cartoons. We know it is not real, but do the characters on screen know this? This age old question has been answered by a few shows that have gifted us with not just a smirk or a nod from the writers, but a direct address.

One very clever Youtube video titled, “Another compilation of cartoons being self-aware / breaking the 4th wall” gives us a look at cartoons breaking the 4th wall to the delight of fans. This is not a recent fad, cartoons have been poking fun directly at the audience for decades. This compilation includes the famous “guy in the audience” shtick where a shadowed figure gets up to leave the theater. In one scene, a group of bulldog plotting gangsters are afraid the guy getting out of his seat is going to snitch to the cops. In the other clip, the shadow figure is disturbing a character’s duck hunting so he becomes the prey.

Of course, there are scenes from “My Little Pony, Friendship is Magic”. This show that is supposed to be for kids has a young adult following, particularly millennial boys called “Bronies” who love simply everything about the characters. The lead ponies are always vying for the viewer’s attention or to make their points known in their frequent debates. The stretching the screen technique to talk to the viewers can be seen there.

Then there are contemporary shows like “The Simpsons” who have a cartoon show within the show, called “Itchy and Scratchy”. Bart comments about the plot of cartoon shows while in a cartoon show. The Simpsons have always been self-aware. So much so that urban legend has it that the show has predicted several major historical events ahead of time. “Family Guy” has done it when they were on camera for a “reality show” within the plot. Then there is “Chowder” where the characters talk about the writing and the script and plot and refer to the next episode. There are many “Chowder” examples online as they do this from time to time–it’s not just a one-off.

Yes, it can get confusing and cartoons can be quite absorbing. Sometimes perhaps we need the show to let us know not to take cartoons, or ourselves, very seriously.