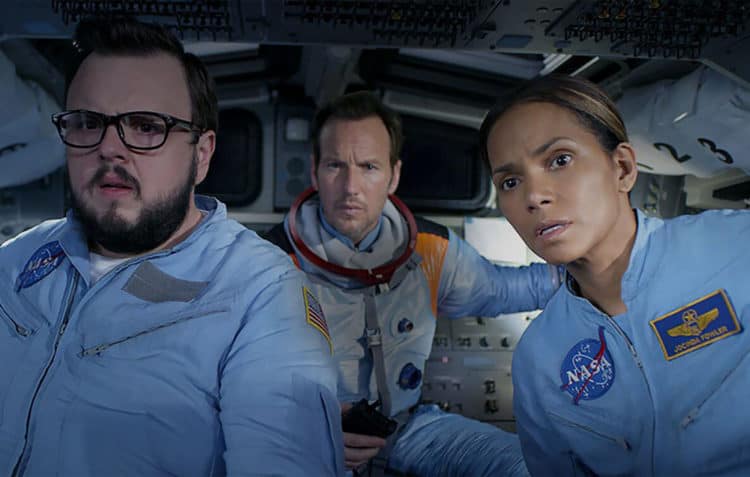 Moonfall is a new take on space sci-fi: a comedy with serious actors tackling an end-of-the-world scenario. The movie stars Halle Berry, Patrick Wilson, John Bradley, Michael Pena, and Charlie Plummer. The plot of the movie is as follows: “In Moonfall, a mysterious force knocks the Moon from its orbit around Earth and sends it hurtling on a collision course with life as we know it. With mere weeks before impact and the world on the brink of annihilation, NASA executive and former astronaut Jo Fowler (Academy Award® winner Halle Berry) is convinced she has the key to saving us all — but only one astronaut from her past, Brian Harper (Patrick Wilson, “Midway”) and a conspiracy theorist K.C. Houseman (John Bradley, “Game of Thrones”) believe her. These unlikely heroes will mount an impossible last-ditch mission into space, leaving behind everyone they love, only to find out that our Moon is not what we think it is.” The movie received lukewarm reviews from critics, but regular moviegoers seem to have enjoyed what Moonfall has to offer. If you’re one of the millions who liked Moonfall, here are a few movies you should check out.

Like Moonfall, Don’t Look Up is also a comedy about the end-of-the-world mostly featuring serious actors. The movie tells the story of two scientists who warn the U.S. president that the world is coming to an end via a comet. The movie proceeds to feature a realistic fallout of what would most likely happen when politicians are in charge of preventing the world’s demise. The movie stars Jennifer Lawrence, Leonardo DiCaprio, Meryl Streep, and Jonah Hill. Like Moonfall, Don’t Look Up didn’t endear itself to a lot of critics, but its message resounded with real-world scientists who could relate to the movie’s plot. In an article for The Guardian written by an actual climate scientist, Dr. Peter Kalmus, he wrote that the movie “captures the madness” he sees every day on his work. “The Earth system is breaking down now with breathtaking speed. And climate scientists have faced an even more insurmountable public communication task than the astronomers in Don’t Look Up, since climate destruction unfolds over decades – lightning fast as far as the planet is concerned, but glacially slow as far as the news cycle is concerned – and isn’t as immediate and visible as a comet in the sky.”

Another must-watch for those who enjoyed Moonfall is Deep Impact. The film is one of the most iconic cinematic products of the ’90s, and featured a star-studded cast in Elijah Wood, Tea Leoni, Robert Duvall, Vanessa Redgrave, Maximilian Schell, and Morgan Freeman. Astronomers have described Deep Impact as one of the more accurate space movies out there. Astronomer Phil Plait wrote of the movie on Space.com, “Deep Impact is one such movie. The producers hired real live astronomers to help them with the script, and the amazing thing is they took the advice. A comet, for example, has almost no gravity, so the scientists suggested the rocket moor itself to the surface. That was used in the movie, along with many other suggestions.” A review for the Hollywood Reporter wrote about the movie: “The performances, though, are moving. Indeed, the producers have assembled an all-star team of players: Morgan Freeman as a compassionate and noble president, Robert Duvall as a tenacious and heroic former astronaut, and Elijah Wood as a 14-year-old who unwittingly discovers the comet’s existence.”

You probably have watched Independence Day before — who hasn’t? — but it’s worth a revisit if you enjoyed Moonfall. Not quite as humorous as Moonfall, Independence Day tackles similar themes and features brilliant actors. Independence Day stars Will Smith as a pilot tasked with taking on the alien invaders and Jeff Goldblum as a scientist who assists Will Smith’s character. One of the most celebrated movies of the ’90s, Independence Day solidified Will Smith’s Hollywood career, having previously been popular as a TV actor in Fresh Prince of Bel-Air. The film also won an Academy Award for Best Visual Effects, which were pretty groundbreaking during its time. In a review by the Hollywood Reporter, director Roland Emmerich, who also directed Moonfall, was praised: “A sci-fi story constellation of the brightest star elements. With German director Emmerich at the helm, Independence Day soars as filmic uber-craft.”

2012 is another Roland Emmerich movie that features his mastery of the end-of-the-world genre. Like Moonfall, the protagonists of 2012 also face an impending end to their existence, but unlike Moonfall, 2012 features a group of nobodies — people who aren’t astronomers, soldiers, or high-level officials. The movie stars John Cusack as a down-on-his-luck author who makes ends meet by driving a limousine. At the advent of the end of the world, he finds himself having to rescue his ex-wife and his kids with the resources and abilities that he has. Other stars include Chiwetel Ejiofor, Amanda Peet, Oliver Platt, Thandie Newton, Danny Glover, and Woody Harelson. Observer praised the movie, writing (via Rotten Tomatoes): “2012 is reminiscent of yesteryear ’80s shlock-tastic blockbusters — total popcorn entertainment with ridiculous dialogue and impossible situations and special effects that will boggle the brain for a good two-plus hours.”

This Is The End

Last on the list is This Is The End. Of all the movies listed here, This Is The End is the least serious, with the movie focused on the zany antics of the protagonists than on anything else. Playing as themselves, the movie stars James Franco, Jonah Hill, Seth Rogen, Jay Baruchel, Danny McBride, and Craig Robinson, with special participation from a wide array of Hollywood A-listers. The plot, according to Rotten Tomatoes, is as follows: “In Hollywood, actor James Franco is throwing a party with a slew of celebrity pals. Among those in attendance are his buddies Jonah Hill, Seth Rogen, Jay Baruchel, Danny McBride and Craig Robinson. Suddenly, an apocalypse of biblical proportions erupts, causing untold carnage among Tinseltown’s elite and trapping Franco’s party in his home. As the world they knew disintegrates outside, cabin fever and dwindling supplies threaten to tear the six friends apart.” This Is The End is a hilarious addition to your must-watch films if you enjoyed Halle Berry’s Moonfall.