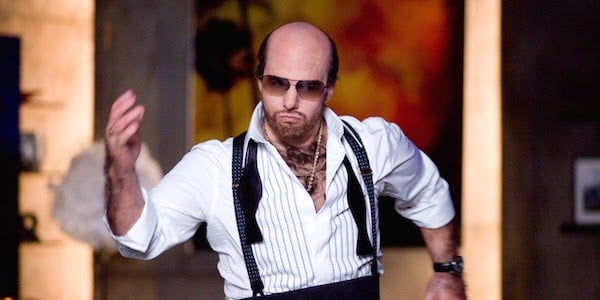 Tom Cruise can be funny when he needs to be. He’s obviously not a classic comedian but he can get down with it and produce some genuinely funny moments when he really needs to. The thing about it is that he kind of has to work up to but out of nowhere the man can produce a funny bit and wouldn’t ever know it because he’s already been typecast as an action type that does drama when and if he feels the need. Since his younger days he’s been more of the action type than anything, so it’s a bit surprising to see him in anything else, and the occasional funny moment throws a lot of people off balance for just a second.

It’s fun to watch though.

Les Grossman is kind of a pig, but one with a very big mouth and a really bad temper. Still, some people didn’t even know this was Tom Cruise until they looked again, and then again. It’s kind of hard to tell just from a glance but once you really listen to him talk and look at his face then you can see it. It’s one of the odder roles he’s played in his life but it was kind of fun.

The moment in this clip comes near the end after the car has crashed and Vincent and Max are both dazed and struggling to get out. Vincent grabs whatever he can find and starts beating at Max with it. Due to his angle however he can’t manage much more than a tapping motion that I found kind of amusing despite the fact that the movie has little if any comedic moments.

When someone tells you to go on three you kind of need to listen. Cameron Diaz’s character is so panicked at this moment that just kind of flies off the handle and wades right into a hailstorm of gunfire. When she hunkers back down Cruise asks her what number would work for her, and she replies that three would be fine. So yeah, get things clear before you move.

This would be an impressive scene if you didn’t know the back story from having watched the movie. Cruise’s character has already lived through this single day so many times that he knows exactly what’s coming and what to expect. Otherwise closing your eyes and allowing someone to attack you isn’t really the greatest idea. But if you know what’s coming, well, it’s kind of easy to move.

And now we come to the classic moment, the one that really defined him in one of the funniest scenes ever. Jerry Maguire is doing everything he can to keep his client roster after being unceremoniously fired by the same man that he mentored. Unfortunately once he comes to Rod Tidwell the train kind of slows and then grinds to a halt as Tidwell wants him to know just what he’s going through and why Jerry needs to care.