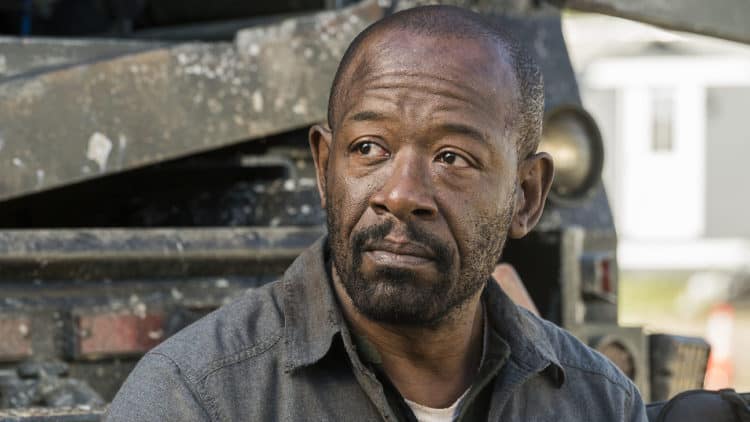 Like most of the character’s on Fear the Walking Dead,  Morgan’s survival story has been one for the books. He watched helplessly as his wife who had turned at the onset of the apocalypse turns his only son after he signaled his mom’s attention hoping that there was some humanity left in her. Sadly that led to his death and Morgan being left to fend for just himself.  That was something that no man should have to endure but living in the type of world they are in now such stories have become common. “I don’t die, ” those were the words that Morgan said to Freddie in Season 6 of The Walking Dead as Alexandria prepared to go to war with the Saviors. This seems to be somewhat true because Morgan manages to always survive at the end of every trial. Morgan believes that he was cursed with having to live through this era of Walkers without his son and wife. In the comic books, Morgan’s character dies after getting bit by a Walker when the gates of Alexandria were breached.

In the finale of Season 5, Morgan ends up with a bullet in his head, and the scene closing with walkers walking towards him. However,  several scenes later he wakes up with the bullet still in his head and flabbergasted that he’s even alive. Morgan begins to make noises to catch Walker’s attention because he just can’t fathom that he’s survived yet another attack. But the Walkers keep walking past him like they don’t hear him. The fact that Morgan is alive has us wondering whether he’s immune to the virus that causes people to turn into these zombies. It is clear that something is off with him, after all his eyes are bloodshot red, and he has a slight twitch that’s hard not to notice. Let’s test this theory.

Morgan Suffers A Bullet To Head Not A Bite

There is no evidence that suggests that Morgan was indeed bitten. Rather he was shot in the head and all though he was able to get the wound clean and bandaged the bullet is still lodged into his head. So the fact that he did survive the gunshot doesn’t mean he’s exactly immune but somehow he’s able to walk amongst Walkers and this was never possible in previous seasons or on The Walking Dead series.

Immunity To Viruses In This Series Is Not Unheard Of

In The Walking Dead series, there has been never been anyone that was immune to Walkers, so if Morgan is indeed immune, he’ll be the first one. This is a good thing because if he is immune there is the possibility that he could be the answer to a cure for this deadly virus. If you recall back to Season 2 of The Walking Dead when Rick, Hershel, Maggie, and the rest of the crew were all living in the prison there was a terrible case of the flu going around that claimed the lives of many of the survivals that living in the prison. However, Hersel, Daryl, Lizzie, and Bob all managed to never contract the flu even though they were exposed to the virus on several occasions. Could Morgan’s case be similar to that?

Andrew Chambliss one of the writers on Fear The Walking Dead sat down with Entertainment Weekly to explain why Morgan seems to be immune to the Walkers. According to Chambliss, it can be contributed to the bullet wound that Morgan has on his head. Although Morgan is alive and seems to be functioning in Season 6, he very well may be on his last leg. A mysterious medic saved Morgan’s life and cleaned up the wound after the attack. Yet, they weren’t able to remove the bullet which is slowly causing Morgan to die. That explains why his eyes are bloodshot red. His wound is becoming gangrene and this has led to him developing a bad stench. This near-dead stench is why Morgan is able to walk amongst the Walkers. With main characters like Rick Grimes and Michon exiting from the franchise, it’s likely that Morgan’s departure is near. The chances of Morgan surviving this injury are slim to none because now that he’s isolated himself from a group there are no medics around to care for him. Not to say that if there was they would be able to handle the scope of this wound. Despite his declining mental health, Morgan has always been a fan favorite because of his fascinating story of survival.