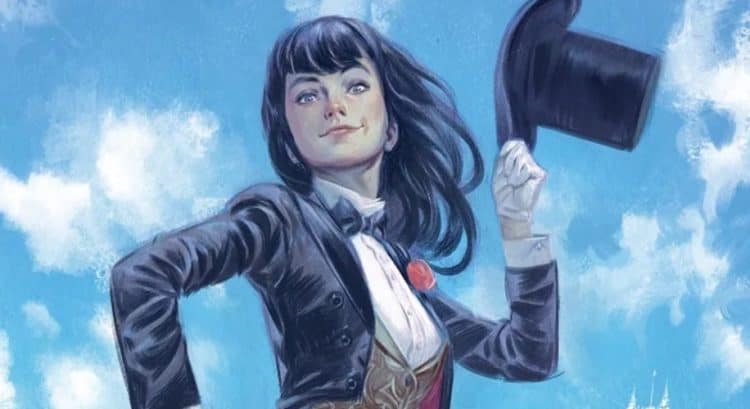 There are those times when it’s a bit difficult to say yes or no when considering which heroes and villains deserve their own movie. DC’s resident magician Zatanna has been around since the 1960s and has interacted with a large number of heroes and villains in her time, but this has largely been in the comics and animated features since she’s still among the heroes that have been brought to live action very sparingly. The idea of bringing a hero or villain to the small or big screen as a live-action character however tends to be a very selective process that favors some and seems to leave out others. If you asked DC and Marvel fans they might give you a long, LONG list of heroes and villains that should have already showed up by now, and if that was the case then TV and the big screen would have already been swamped with comic book movies for years. Seriously, that’s how many stories there are out there, and Zatanna is just one of them. She’s one of the more interesting individuals though since her angle with magic is that it’s innate and bound to her as tightly as her DNA thanks to her mother and father being honest to goodness magicians. One would think that this would be enough to put her right in the middle of things when it came to the DC universe, but so far she’s remained an unknown for the most part when it comes to her place with her fellow heroes.

J. Richland Anderson of CBR lists a few of the things that Zatanna has done in her career as a hero and that have made her into someone that could possibly carry her own show. If mind-wiping Batman and destroying a batsuit weren’t enough, she’s also killed magical gods, meaning that her power is on a level that makes it possible to think that she’s no one-trick pony. This alone should make a person think that she’s ready for the big leagues since some the moments on the list make it seem as though she was just flexing her power at the time, though there were a few moments when she was in dire peril that her power really came through in a clinch. Zatanna however is still a hero that hasn’t been mentioned nearly as much as others, since uttering the name “Batman” still invokes a great deal of awe within a lot of people, while saying “Zatanna” might get a few people smiling but not nearly as many. It’s true that she hasn’t been given the same exposure over the years since she hasn’t been around as long as the dark knight and several others, but it might be time to at least let her step into the light and see what she can do.

It might be better to see if she can helm her own show before thrusting her into the spotlight on the big screen, if only to make sure that people are going to respond to her in a way that will be positive as well as worth the money that’s being invested. There’s nothing to say that she’s not a worthy superhero, but considering that people have found Doctor Strange and Wanda Maximoff to be enticing and even superior on the big screen to much of what DC has done, her introduction would have to be something insanely popular to really contend as a magic-using hero. The fact that she has to speak her spells backward is kind of interesting since it does have the element of confusing one’s opponents if they’re not aware of what she can do, but against other magic-users it still seems as though she might have a bit of a struggle since some within the DC and Marvel universes don’t have the need to speak when they cast spells, and might overwhelm her in a big way. If you don’t think the fans are thinking about this then you haven’t seen the many sites devoted to pitting one hero against another. Maybe one of these days we’ll even see, thanks to the fans and some common sense finally, a match between DC and Marvel to see just which heroes and villains can really top one another. But until then, Zatanna is considered powerful, but not all-powerful as some characters.

In the matter of Zatanna becoming yet another hero to join the ranks of those that have been given their own shows or at least prominent positions in TV and movies, it would be fair to say that she’s worth the chance and she’s definitely someone that would be seen as a welcome addition to the fold. But until that happens fans might just have to sit back and wonder what could be and what might come of it should that day ever happen.