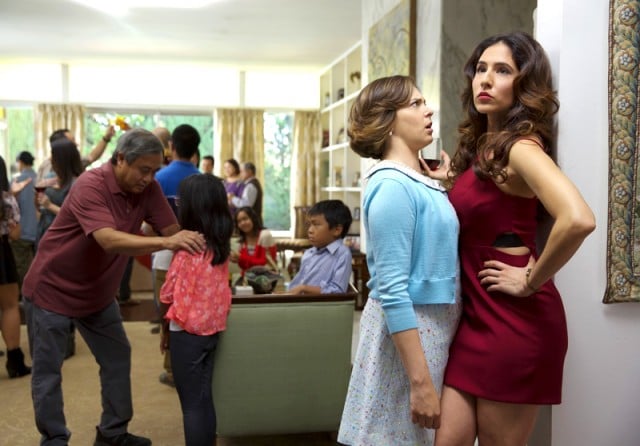 I wasn’t expecting a holiday episode so early in Crazy Ex-Girlfriend‘s run, but the Thanksgiving backdrop of this week’s episode proves to be a perfect way for the show to expand its worldview and deliver a pair of wildly entertaining musical numbers. It may lean a little heavily into the cringe elements of its humor, but it does so with a careful hand, never committing too far to a joke or plot line in order to uproot the status quo at the end of the hour – except of course, in the one story describing just how hard changing one’s own reality can be.

However, there are a few sticky spots in “My First Thanksgiving,” mostly found with Paula, whose friendship with Rebecca is reaching unhealthy levels that aren’t really explored with any meaning in this episode. In Crazy Ex-Girlfriend‘s attempt to build out a wide array of supremely flawed, yet empathetic people, the show has failed in finding balance with Paula. She’s had a few moments early on where we can feel her pain of boring suburban life, but her unattractive obsession with pushing the most unhealthy agendas possible for Rebecca’s fragile sanity is starting to become a grating element. There’s only so many cutaway moments I can watch of Paula ignoring her family to spy on everything Rebecca’s doing at Josh’s house – and when they do cut to her sitting at the table, iPhone in hand, there’s a certain charm that’s lost with Paula’s presence, a character who is so mired in the misery of her life that she’s willing to insert herself into the worlds of others without nary a care (except for last week, which I thought represented a step forward for the character).

Save for her grating, unnecessary influence on Rebecca, “My First Thanksgiving with Josh!” is a triumphant hour of pushing the players of West Covina forward, pitting Valencia and Rebecca against each other in a fight for the Chan family’s affections, which Rebecca noticeably dominates. Prefaced by her hilarious rap track “I Give Good Parent”, Rebecca’s comfortable navigation of the Chan family provides a nice backdrop for conflict with Valencia, who feels the Chan family has unfairly labeled her a simple person, lacking in ambition and intelligence they wish their son to have in a partner. But she does have the power of sex, which neither Rebecca nor Mrs. Chan can use to convince Josh: and with that, Valencia pushes Josh to ask her to move in with him, throwing a major wrench into the plans Rebecca has to find out what Josh means by “very attracted” (which could either be a lot, or little: he does use “very” quite a bit).

Where the episode really comes together is away from the entertaining, if predictable arc of Rebecca’s time with the Chan family. Greg trying to leave West Covina and go back to business school is the real meat of this episode, a subplot with such a strong emotional center, it’s a surprise this wasn’t more of a focus. It does such a wonderful job building empathy for Greg, showing his strong relationship with his father, and the inherent responsibility he feels to keep him alive, the only family he has left – even if it comes at the cost of his own dreams, which means taking his job back at the bar, and spending all his money keeping his father breathing. It’s an isolated story, sure, but one that finds itself at the heart of the series and the many attempts at redefinition we have as humans during our adult lives: often, the moments we think will change everything end up being drops in the bucket, the real surprises in life coming in those moments in between those days when we stare at the back of our hands, realizing how much we don’t really like seeing something we’ve become so damn familiar with.

The pathos this episode offers Greg as his own character is astonishing. It may feel a little out of place with Rebecca’s romps through Filipino cuisine, but it certainly fits in line with the series’ theme of redefintion and the struggles that come with it. With Rebecca, Paula, and Greg separated for nearly the entire hour (at least physically), “Thanksgiving!” might lack some of the narrative unification of previous episodes, but it finds strong character moments when it reinforces the show’s current reality on the trio, reminders of the racist uncles, missed romances, and failed attempts that have driven them to the drastic places they’re in during “Thanksgiving!”, and setting up a number of intriguing psychological challenges for them to face as the first season continues. Not as succinctly poignant as previous episodes, sure, but when it matters, “My First Thanksgiving with Josh!” packs more than enough punch to keep me interested.