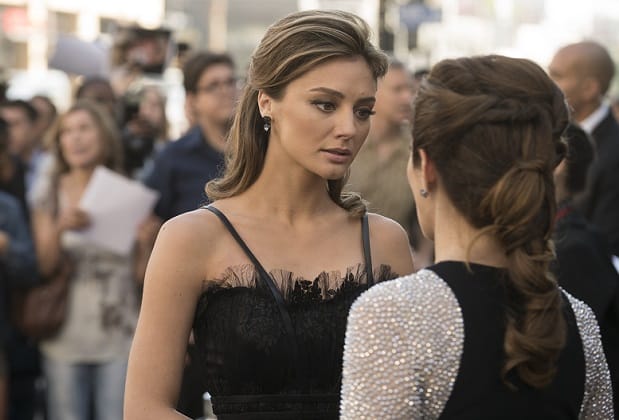 It’s very hard to keep track of every last star in Hollywood but it bears mentioning that some of them kind of come and go in regards to the spotlight even if most of them would rather come and stay for a long period of time. Christine Evangelista is one of those that seems to step into the light and then fade into the background now and again for some reason despite the fact that she’s been keeping a pretty steady rhythm with her career. She hasn’t faded off into obscurity obviously and she’s not in any danger of being allowed to just disappear entirely, but it does seem as though she comes forward now and again to be recognized and then kind of sidles to the background as though being relegated to the supporting roles that she’s been so comfortable in for so long. It could be that this is where she’s comfortable.

Given how many big and small screen actors have taken to the stage at one point or another in their career it’s kind of interesting to note that those that have stuck with stage acting haven’t done the reverse. It’s almost as those that move on to movies and TV are the minority that feel they can walk between both venues without trouble.

9. She’s starred in The Walking Dead.

It was kind of odd to see Negan preach that everyone had to work for what they got and yet he had the lion’s share of just about everything. That’s the kind of despot you’d gladly depose if you had a lick of sense, but then again the Saviors wanted security and order, so going along to get along was kind of the order of the day.

This film showed that you’re never too old to learn new things and that retirement, as great as it is for some people, is kind of lonely and not as great as it might seem when you’re on your own. It also showed that older folks aren’t helpless or brainless and can be a huge boon to those around them.

You might think that after an accident that almost paralyzed him a boxer would take the advice of those around him and take it easy. Of course when he was more used to being up and mobile ‘taking it easy’ meant getting out there and doing the best he could to compete.

The 2000s generation of actors are still trying their best to fill the shoes of those that they’re eventually going to replace and in some cases are doing very well, but it’s a transitional phase that has yet to be finalized and probably won’t be for some time to come.

5. She’s done a voice part for a video game.

So she’s branched out a bit in her career and done a few other things, a voice over for a video game being one of them. Something seems to indicate that she’s trying new things but not going full-bore towards them just yet.

4. She has a moderate following on social media.

It’s kind of interesting to think that actors might actually monitor their followers on their social media sites. That seems like it would take an inordinate amount of time given the long days that a lot of actors work, but perhaps they have people helping them to keep track of social media.

5’4″ seems like an awfully short average, enough so that calling anything taller seems like kind of a joke in a way. There’s no mockery about anyone’s height but it does seem at times as though being a bigger person in a world where the average is still pretty small makes giants out of people that feel quite normal in their own familiar surroundings.

Christine has a long way yet to go in her career no doubt and she’s still got plenty of years left in which to enjoy what she’s got and keep building on something that’s already been fairly successful.

1. She’s very much into fitness.

She does like to keep herself in shape and it shows. This is a huge boon to just about anyone and everyone in fact since it extends your lifespan at least a little bit and can make you feel far more energetic and capable of doing things that you might not have the energy for otherwise.

It wouldn’t be fair or accurate to say that her career has gone nowhere but it does seem fair to say that she’s got a lot of potential that isn’t being used on a regular basis and could easily be turned into something great.