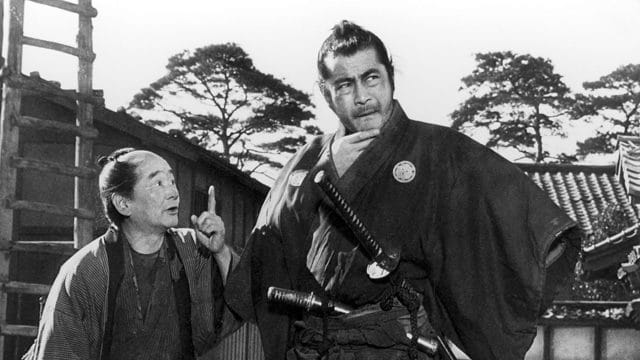 If you’re thinking that Yojimbo sounds like a few other movies you’ve seen in the past, keep in mind that it was a movie that set the tone for those same movies. The showdown in the street however is something that is classic no matter what movie you’re watching. Now put the music from a Fistful of Dollars into the mix and THEN you’ve got something extra special.

Westerns and samurai movies have been getting lumped together for a while now so it’s really not a big surprise that they tend to fit so well with one another. Despite being very different in style, location, and mannerisms, the correlation between the two genres is still very similar.

This is what grabs me the most really.

The main character breezes into town almost accidentally it seems, not looking for much of anything but a place to hole up for a night or so without trouble. Somehow though, that person finds trouble and figures that they have to do something about it for the betterment of the town. It’s a little presumptuous, but it’s definitely something that’s needed, as the townsfolk might agree if they’re not so scared. The one person that the individual talks to in town, the first friendly person usually, is the one that tries to keep their head down but is constantly ridiculed and thought of as a fool. That’s the person the main character tends to keep in touch with the most.

Two rival groups are almost always at odds in the town, and this is what spurs the lead character to action. He decides to join one side by killing the men of the other side. Then when it’s feasible he begins to tear away at both sides, joining the opposing side in a show of loyalty that puts their fears to rest. But then the lead character gets just the tiniest bit sloppy and is found out. The beating he takes at that point should kill him, but somehow he gets away, only to watch as one group finally annihilates the other group.

The stranger comes back with a vengeance and begins to decimate the remaining group, until only a few are left for a final showdown. That’s when the stranger shows everyone just how dangerous he really is as he deals with the remaining group in a fashion that is both brutal and very final. He might leave one alive just to tell the tale, but otherwise he slaughters them all. And by re-dubbing Yojimbo with the Fistful of Dollars score it didn’t make me thing of the old Clint Eastwood classic strangely enough. It made me think of Last Man Standing with Bruce Willis.

The story is almost scene for scene the same thing, just kicked into a different era and location. The brutality of it is about the same as well. One thing is always proven right though, no matter who was in the right and who was in the wrong, both groups are eventually better off dead.