Home
Movies
Behind the Scenes Training for “Star Wars: The Last Jedi” 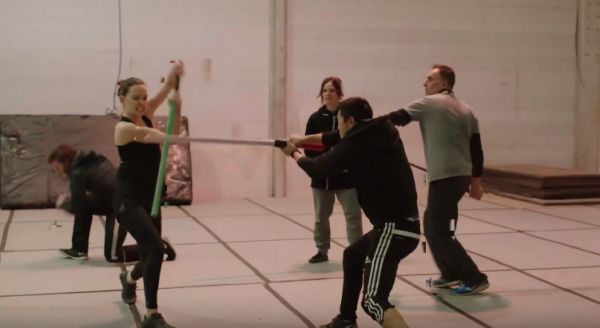 Going behind the scenes for Star Wars: The Last Jedi gives the impression that there are going to be some epic fight scenes coming up in this latest movie, and a lot of us simply cannot wait to sit down and let the experience take us to a galaxy far, far away. The level of dedication and training that the actors have had to go through looks absolutely intense, and just watching Ridley and Driver going at it with the stunt coordinators is something that seems to tell a story that the coming battles will have us all gripping our arm rests with white-knuckled fingers as we stiffen in anticipation of the blows to come.

Rey simply wielding a lightsaber will be something cool to watch again since in the last film she picked it up and began to show Kylo Ren just what was up when the Force took her so fully and guided her every movement. The dark lord had no idea just what was happening and was nearly taken out before Rey escaped with Finn. No doubt Kylo will be looking for some payback in the next film.

It’s looking like one of the newest characters, Rose Tico, will be getting in on the action as well as she underwent fight training for the movie as well. Her character isn’t fully known as of yet, but so far she’s being shown as fairly prominent in the film, so she could be seeing some decent screen time.

Finn vs. Phasma is going to be awesome though. Finn is already being rumored to have Force potential, and whether or not that holds any truth we’ve already seen that he’s a decent fighter. Phasma though, if you’ve read the books or the comics, is a straight-up killer. She holds her own life as sacred and won’t stick her neck out for anyone unless it will benefit her. Taking on Finn will be a matter of survival and a little bit of payback from the last movie. Keep in mind he, along with Han and Chewie, did dump her into a trash compactor. So it’s a little personal for both of them, which means their fight will be more of a grudge match than anything.

Rey vs. Kylo needs to happen though. In the trailer we see them talking and it looks as though they might form an alliance of some sort. But in reality they need to throw down again in order to see just who has the stronger grip on the Force and who is the better fighter. It could get very, VERY personal but the chances are that Kylo and Rey will fight more or less because she doesn’t fully ascribe to the Dark side while Kylo is still conflicted but will fight for the Dark largely because he’s too damaged to return to the Light just yet.

The coming Star Wars movie is going to be something that casual and hardcore fans won’t want to miss, and it’s almost here. Nine days and counting.