Home
Television
Banshee
Banshee Season 3 Episode 9 Review: “Even God Doesn’t Know What To Make Of You” 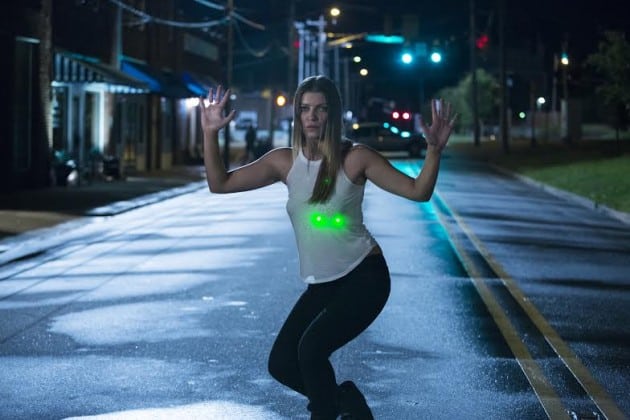 Did we really think Banshee was going to take a breather after a sweat-soaked adventure to the French Quarter? “Even God Doesn’t Know What To Make Of You” continues to swing Banshee‘s karmic hammer in the faces of its characters, piling on powerful image after powerful image and turning what amounts to 45 minutes of setting up the finale into an endlessly thrilling descent into madness, complete with Kai Proctor truly embracing the devil inside him.

As it often is with Banshee, the most powerful moments of “Even God” are the moments unspoken: Stowe’s glee at getting the drop on three-quarters of the Banshee crew, Hood’s desperate, cold attempt to quickly close off his business with Kai once and for all, and the dissolution of Job and Hood’s relationship. Directed by Loni Peristere, “Even God” works on a consistent shot progression that incrementally pushes the camera closer to each character’s face whenever they’re casted in shadow; it’s a fantastic visual device to convey the vast difference between the calm, facsimile smiles we see at a distance, and the looming sense of karmic justice that weighs heavier and heavier as the camera pulls closer and closer, distorting light from different angles to present just how much the past defines these people.

Some of this isn’t explained at all; we may never know how Stowe got so messed up in the head, but we really don’t need to. That man is clearly off his rocker, and all we need to see is his fancy military duds to see he’s a man gone mad with power, light shades of ol’ Col. Kurtz (Apocalypse Now, for you young folks) creeping across his face. He’s a menace with a mission, a man who reminds Sugar, Job, and Carrie (who Hood distinctly calls Ana this episode, something that probably means nothing) that nobody ever escapes their past, especially when they sit right at home like nothing ever happened. His presence isn’t felt until the third act, but once he’s onto their trail, he quickly grows into this monstrous, nightmarish figure, similar to the apparent increase in stature Chayton had between seasons. When Banshee wants to make someone larger than life, they don’t play: and the larger Stowe looms, the more interesting he becomes, even though we all know we’ll never get a lot of insight into what created that man.

We do have quite a bit of insight on what created Kai – or at least the notion of it he rejects in this episode, his faith in peace and understanding shattered by his mother’s death and subsequent kidnapping by the Blackbeards, who introduce their own fun little antagonist, a man whose missing eye is something I think we all know came from Proctor at one point or another. We have no idea what their history is, but we don’t need to: Banshee throws so much subtle color into their conversation, we can already paint the broad strokes of what Kai’s done in the past to get the Blackbeards on the same page as him. No, their blind leader isn’t as fascinating as some of this season’s other colorful villains – but like Stowe, he proves to be an effective stop-gap as Banshee heads towards a crossroads.

There’s a lot of talk about moving forward in “Even God,” and although the natural inclination is to think it’s creating hope to squash it in the next hour, I’m willing to trust Banshee to do more with it than that. If anything, Banshee has consistently pushed its characters forward, even if it forces them to pay the consequences immediately afterward. The path to personal growth and human connection on Banshee is not done with flowers and conversation, though: it seems one literally has to beat the maturity out of them. A fist or a bullet is an important, important currency on Banshee, one the show doles out more carefully than one might think: a bullet can catalyze an important friendship (like we see with long-haired Job and Hood in the past), and a fist can act as a defensive gesture, deflecting deeper, more painful emotions under the guise of assumed masculinity. Violence, as often as it is doled out on Banshee, does not come empty: it’s why a scene of Kai lighting people on fire can be such a powerful emotional moment as it is a visually unsettling one.

The only unfortunate part about “Even God” is that’s essentially the first part of a two-part finale, and at forty-five minutes, it occasionally feels over-crammed, rushing through a few quick beats (maybe Carrie doesn’t get divorced! Deva smoked pot again! Kurt’s story told through exposition!) in order to get all its pieces in place for the finale. But these are small potatoes, folks. Though the emotional stakes of this finale are markedly lower than the last two seasons (with no Rabbit, Chayton, or FBI problem around), all signs point to another balls-to-the-wall finale for Banshee next week, as the past continues to bleed through (in many cases, literally) into the present lives of Banshee‘s lost souls.