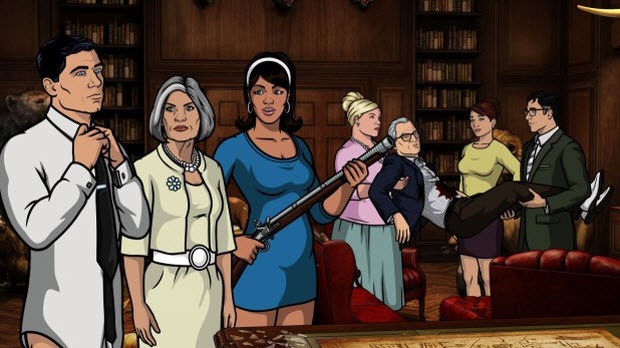 Archer Vice picks up after last week’s botched attempt to turn product into cash. If viewers thought a little bit of Pam on a little bit of drugs made for a few laughs, then “A Debt of Honor” effortlessly proves that a lot of Pam on a lot of drugs make for a lot of laughs. Where most straight-up comedies would drop Pam in a scene and let the character do all the work, Archer Vice is doing nothing if not making each member of the team accountable for his or her actions. So, when Pam’s addiction gets the better of her, she ends up bringing a whole lot of conflict to the Tunt mansion, which creates more opportunities for more laughs, sure. But it also reinforces how unfamiliar the territory of being an ex-ISIS agent is and how the transition is a necessarily rough one.

Some of the non-agents, though, have the worst of it. There’s certainly a question of how much the writers can get out of the There Will Be Woodhouse gag, but given the track record of running gags on Archer, that question becomes less and less relevant. One of the shining moments of “A Debt of Honor” actually goes to Woodhouse as he has to endure ringing telephones and doorbells, which is any good butler’s worst nightmare. Woodhouse, who also has a history with drugs, certainly isn’t the best of butlers, but even without a medicine ball weighing down his chest, it’s easy to feel his pain. Ron Cadillac is the other man-out-of-place who gets the short stick, catching a stray bullet in a fight he wants no part in. Based on the preview to Archer Vice, Ron’s life was in question, so it’s a huge relief in “A Debt of Honor” to see that scene play out and for Ron to still be alive. He is one of the series’ most important characters going forward because of the untapped potential he possesses, especially as a father figure to Sterling.

The rest of “A Debt of Honor” feels remarkably like a normal episode of Archer, which might just mean that the creative team has found a lightning fast way of adjusting to the new setting. We still haven’t seen Cheryl break out as the national country star she’s supposed to become, so maybe things get a bit trickier then, but the battle with the Yakuza feels absolutely at home in the Archer pantheon, once again showing narrative respect to Pam’s past. As Lana becomes more pregnant, that leaves most of the field duties to Sterling, but it’s still good to see Lana speak out in a back-handed show of support for Sterling – he can’t do it alone. What transpires in the scheme to get out from under the Yakuza’s debt is standard, hilarious Archer fare culminating in a limo scene between Sterling and the Yakuza boss, who Malory definitely didn’t kill. The conflict comes down to a matter of “saving face” once Sterling has bested the boss (and finished most of his booze and released most of the bullets in his gun in his never-ending attempt to spread tinnitus across the universe). It’s a simple, effective conclusion to what is a story that takes place almost entirely within the confines of the mansion.

Once again, an Archer Vice episode ends with a joke that lingers on the punch line. Malory knocks a phone out of Sterling’s hand and it goes crashing down the concrete stairs and breaks. It turns out it was Woodhouse’s phone, and all Sterling can do is hunch forward in laughter. Admittedly, this is probably the biggest laugh-out-loud moment in the entire episode, which is great in terms of leaving the viewer with a smile. But considering the serialization of this new version of Archer, wouldn’t it be nice to mess around with genre tropes like cliffhangers? Maybe the meaty crime plots are all going to intersect later in the season, but there’s a lot of room to toy with structure here in ways that previous seasons of Archer could only do in their two- or three-part arcs. It’s a minor quibble, especially because of how good these last two ending scenes have been, but Archer is so pitch-perfectly polished that these things start to manifest themselves at some point.